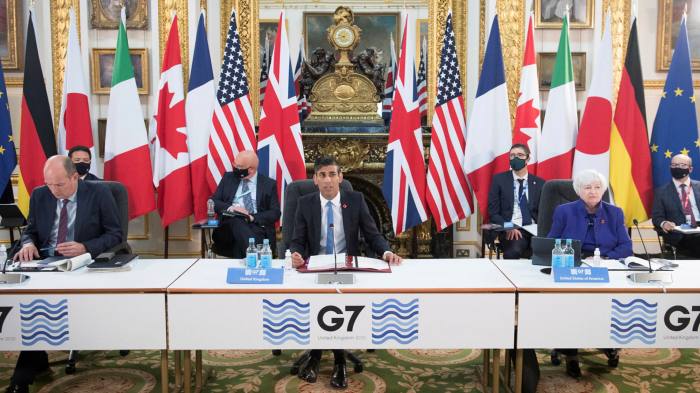 Finance ministers from the G7 group

Nations listed as part of the agreement include Canada, France, Germany, Italy, Japan, the UK, and the US.

Some of the world’s wealthiest nations have reached an agreement to tackle tax abuses and reform the global tax system.

Finance ministers from the G7 group of wealthy nations signed a landmark deal on Saturday as part of talks held in London.

According to the UK’s Chancellor of the Exchequer, Rishi Sunak, the group has agreed to introduce a global minimum corporate tax rate of 15 per cent, a move that will see tech giants and multinationals cough out more taxes.

“I am delighted to announce that today after years of discussion G7 finance ministers have reached a historic agreement to reform the global tax system,” Sunak said after a Group of Seven (G7) meeting in London.

“To make it fit for the global digital age, but crucially to make sure that it is fair so that the right companies pay the right tax in the right places and that’s a huge prize for British taxpayers.”

Nations listed as part of the agreement include Canada, France, Germany, Italy, Japan, the UK, and the U.S

Reports said the nations will ensure that multinationals pay more tax where they operate, in order to avoid companies setting up local branches in countries with low corporate tax rates and then declaring their profits there.

The first ‘pillar’ of the agreement would apply to global companies with at least a 10 per cent profit margin, according to the BBC .

The “second pillar” of the agreement is a commitment to introducing a global minimum corporate tax rate of 15 per cent , which will disincentivise major companies from declaring profits in tax havens and stop countries from trying to undercut each other.

Sunak said on Twitter that a 20 per cent tax on any profit above the agreed margin would be reallocated and taxed in the countries where the companies make sales.

The UK Guardian reports that big tech companies like Microsoft, Amazon, Facebook, the Google owner Alphabet, Netflix, and Apple have long been accused of avoiding paying tens of billions less tax over the past decade on trillions of dollars of revenue than the figures cited in annual financial reports.

The demand, which was later withdrawn, came in the heat of controversies generated over a separate $5.2 billion fine against the company.