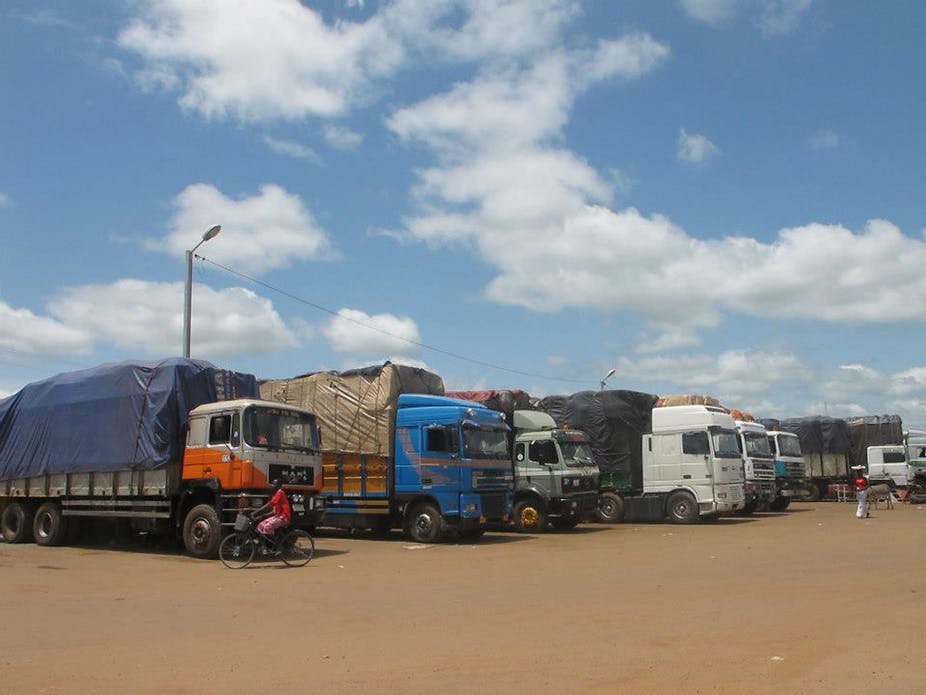 The border closure has affected goods from other West African countries. Wikimedia Commons

Nigeria recently partially closed its border with Benin in an effort to stem the smuggling of rice. It then went on to close its land borders to the movement of all goods from Benin, Niger and Cameroon, effectively banning trade flows with its neighbours.

Border closures are not new in Africa. But Nigeria’s actions raise important concerns about the seriousness and prospects of regional integration in Africa.

Nigeria acted just three months after it had signed the African Continental Free Trade Agreement. With 55 member countries, a combined GDP of $2.4 trillion and a total population of 1.2 billion, the agreement will create the world’s largest free trade area. Its aim is to promote intra-Africa trade, which is abysmally low at 16%.

To restrict trade flows so shortly after this momentous feat is a major blow to integration efforts. It also shows how unprepared African countries might be for free trade. It’s hard to see how the free trade deal can increase intra-Africa trade to 60% by 2022, as projected , when it is being undermined from the start.


These early trade tensions between Nigeria and its neighbours are hardly surprising. They underlie some of the fundamental problems that must be addressed before cordial free trade can succeed on the continent.

In the case of Nigeria, Africa accounts for only 13% of its exports and 4% of its imports. These statistics probably underestimate the true volume of trade between Nigeria and its neighbours. But they show that Africa is a dispensable market.

Nigeria’s economy declined in 2015 and further contracted by 1.6% in 2016 . This was largely due to a worldwide drop in the price of crude oil in 2014. The country has since fallen on hard times. Foreign direct investment inflows have plunged by 55% . There have also been shortages of foreign exchange which have put the Naira in a tailspin, causing the government to implement stringent foreign exchange controls.

Crude oil accounts for over 95% of Nigeria’s total exports and 90% of its foreign exchange earnings. This shows that Nigeria has neglected other sectors of the economy.

The recent oil crisis highlighted the need for the country to diversify and restructure its economy. The result was increased attention being accorded the agriculture sector, which had declined significantly since the late 1960s.

Nigeria’s 2017 Economic Recovery and Growth Plan aimed to deepen investments in agriculture and increase the sector’s contribution to economic growth from 5% in 2017 to 8.4% by 2020. The idea is to revive domestic farming and save on food imports (over $22 billion a year).

It is this national plan that precipitated the border closure. The government wants to protect domestic farmers from cheap imported foodstuff.

While Nigerian rice farmers are happy about their government’s actions, there are concerns about whether domestic food production can meet domestic demand. In 2017, demand for rice in Nigeria reached 6.7 million tons, almost double the 3.7 million tons produced domestically.

This is good for the farmers. But it is hurting consumers.

Then there is the bigger problem of government-subsidised petroleum being smuggled out of Nigeria and sold in neighbouring countries.

The price difference creates the incentive to smuggle petrol out of Nigeria.

Nigeria’s largest export is crude oil, and its largest import is refined oil. Domestic refineries are reportedly operating well below their capacity, causing fuel imports to average 29% of total imports over the past three years. Roughly 90% of fuel in Nigeria is imported, and all of it is subsidised. Last year, the subsidy bill was estimated to reach $3.85 billion.

Smuggling fuel out amounts to the use of public resources to subsidise neighbouring countries. Since the border closure, reports suggest that the delivery of fuel in Nigeria has dropped by 20% and sales by 12.7%.

This suggests that the demand for fuel in Nigeria is high because some of it is bought and smuggled out.

Why the border closure is worrying

Indeed, free trade has its benefits, but it also has costs. Nigeria’s bid to protect a declining rice farming industry and save foreign exchange has led to protectionism that defies the principles of a free trade area.

The African Union (AU) has been muted on the issue of the border closures. This might be because it does not yet have detailed institutional arrangements for settling disputes within the free trade area.

Another factor might be that it has been quiet because Nigeria is involved. As Africa’s largest economy, the AU courted it earnestly to sign. The agreement needs Nigeria, arguably at whatever cost.

The regional trade bloc ECOWAS has also failed to bring Nigeria to heel. Both Nigeria and Benin are members of the bloc, created in 1975. All it has done so far is to appeal for the borders to be opened. It clearly has no enforcement power.

Nigeria’s border closure may be a precursor. More incidents like this can be expected as the realities of free trade kick in. Some countries will lose, others will gain.

The AU needs protocols and measures to manage free trade, as well as programmes to prepare political leaders for the realities that will follow.

The free trade area should not be a mere symbol. It must be fully understood and appreciated for it to succeed.

The Nigeria border closure must be resolved as soon as possible. It is diverting attention and positive energy from matters that can promote the free trade area, such as investments in transport infrastructure, trade data capture and border protection.

More importantly, it is a bad precedent that could reduce other countries’ commitments to economic integration in Africa. The AU must act now, or prepare to bury the free trade deal.