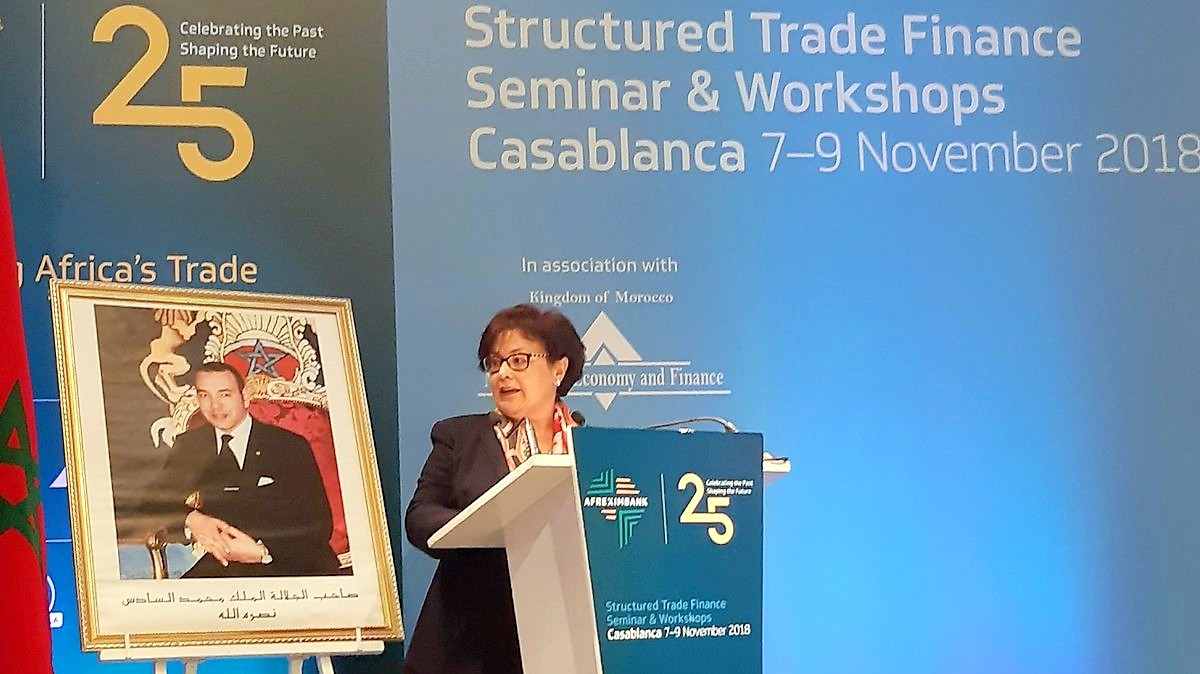 The Director of Treasury and External Finance, Ministry of Economy & Finance, Morocco, Zaaboul Faouzia at the 18th Afreximbank’s Annual Seminar on Structured Trade Finance in Casablanca, Morocco on Wednesday

To realise its strategic agenda to transform trade and development in Africa by 2021, the African Export-Import Bank (AFREXIMBANK) says it would work through intermediaries and local agents in its 50 member countries.

The bank’s Manager, Legal Services, Enga Kameni, said since it was impossible to relate directly with small and medium enterprises in member countries, working through trade finance Intermediaries (TFIs) and local administrative agents (LAAs) would help identify their peculiar needs and how to support them grow.

Mr Kameni who spoke on the bank’s efforts to promote intra-Africa trade and development, said TFIs and LAAs understand the challenges and opportunities in the local environment and would be able to offer informed advice on financial support necessary to drive growth.

He was speaking at the 18th AFREXIMBANK’s Annual Seminar on Structured Trade Finance in the port city of Casablanca, Morocco.

Under the 5th strategic plan of the bank unveiled in December 2016, tagged: “Impact 2021: Africa transformed”, Mr Kameni said AFREXIMBANK’s focus was on promoting intra-Africa trade, facilitating industrialisation and export development in the continent.

The bank’s Director & Global Head, Trade Finance, Gwen Mwaba, who also spoke on the topic said financial institutions in member countries selected as TFIs and LAAs must not only be credit worthy, but seen to identify with the bank’s strategy and passion for Africa’s development.

Besides, other minimum criteria for selection of rated entities include an “investment grade” rating from a reputable rating agency (such as a minimum of “BBB-” rating from Standard and Poor’s; “Baa3” rating from Moody’s for international ratings; a minimum local rating of “BBB+” from African-based rating agencies.

In addition, the selected entities must possess a minimum 3.5 per cent net profit and equity funds; 15 per cent liquidity ration; debt service ratio of not greater than 200 per cent and a maximum 63 per cent of overhead ratio.

“The role of the TFIs and LAAs will be to monitor the performance of the facility and borrower through regular calls and site visits and provide monthly or quarterly reports; report any potential threats to the transaction and advise action to be taken, and ensure all security documents are received and perfected according to local laws,” Ms Mwada said.

In his introductory remarks, Executive Vice President Business Development & Corporate Banking, AFREXIMBANK, Amr Kamel, said Morocco was deliberately selected as host to the seminar as it offers many lessons for participants on how to pursue economic development across Africa.

“Just 20 years ago, Morocco’s economy was dominated by agriculture; electricity reached only around 60 per cent of the population, and almost a quarter of the population did not have access to potable water,” Mr Kamel noted.

He said today, the country has recorded “remarkable progress” and “transformation after years of serious efforts to modernise and expand its infrastructure, upgrading roads, ports, and airports to support its intentions of becoming a commercial crossroads between Africa and the West.”

“Electricity reaches 99 per cent of the population and more than 85 per cent have access to potable water. Manufacturing has become a mainstay of the economy with Morocco emerging as Africa’s largest automotive producer and a hub for aeronautical manufacturing,” he said.

Besides, Mr Kamel said Morocco’s trade with Africa accelerated from $128 million to around $3.3 billion in 2017, facilitated by transport, communication, and financial links, through among others,

He said AFREXIMBANK’s goal is to strengthen the capacity of its partners and clients in understanding trade and trade-related project financing issues as they affect Africa.

Driven by the widening trade financing gap and the challenge of increasing Africa’s share of global trade, the executive VP said the annual trade finance seminars were introduced in 1999 to expose participants to the challenges and issues in structured trade finance to boost intra-African trade.

Participants in the seminar including bank executives, law firms and other financial institutions, senior government officials and financial regulators as well as corporates actively engaged in the promotion and financing of African trade and trade-related projects.

The seminar was declared open by the Director, Department of Treasury & External Finance, Ministry of Economy & Finance, Kingdom of Morocco, Zaaboul Faouzia.