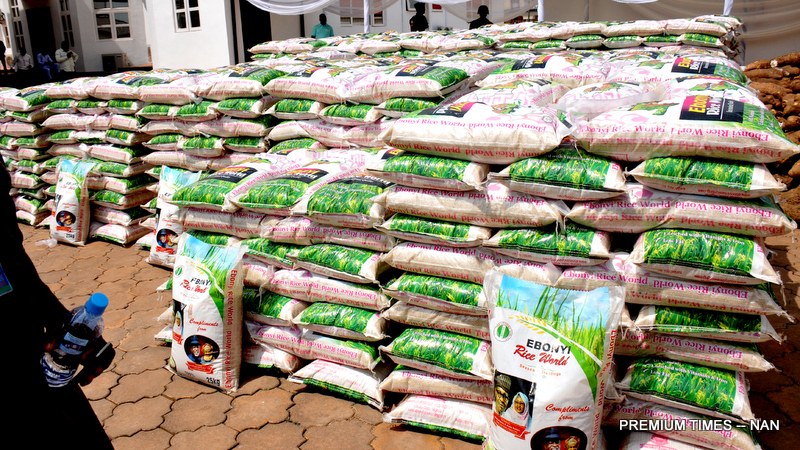 Bags of rice used to illustrate the story.

The Federal Government says it will shut down the land border between Nigeria and a neigbouring country in a few days time to avoid smuggling of foreign rice into the country.

Audu Ogbeh, the Minister of Agriculture and Rural Development, made the disclosure in Abuja on Monday while speaking with youth in a leadership clinic under the auspices of Guardians of the Nation International (GOTNI).

Mr Ogbeh who did not mention the particular country and border, said shutting the borders had become necessary to encourage local production and sustain the economy of the country.

The pronouncement is coming weeks after PREMIUM TIMES’ investigation exposed how, in the South-western borders of Nigeria with Benin Republic, smuggling of Thai and Vietnamese rice is flourishing like never before.

The report, published on June 4, revealed that while rice smuggling activities are petering out in the popular Seme border with a few cars and a cluster of shops still dedicated to it, the new smuggling hub is Owode-Apa, west of Badagry.

Mr Ogbe on Monday said that the unnamed neighbouring country was bent on destroying the economy of the country and discouraging local production of rice, hence the need to shut down the border.

“Our other problem is smuggling. As we speak, a neighbour of ours is importing more rice than China is importing.

“They do not eat parboiled rice, they eat white rice, they use their ports to try and damage our economy.

“I am telling you now because in a few days, you will hear the border has been shut, we are going to shut it to protect you, us and protect our economy.

“You will start seeing all sorts of negative things on the internet.

“Let me tell you why we need to shut the border, I grow rice, I was the first Nigerian to mill rice free of stones, if you plant rice in certain parcels of land, some poisonous materials gets into the rice.

“If you go to the Delta in many countries, in South East Asia where they grow the rice, if you plant rice in the same place like four to six years continuously, the quantum of arsenic begins to increase and arsenic causes cancer and that is what they are dumping for us.

“Some people say they prefer Thai rice because they are very sophisticated, welcome to poison,’’ Mr Ogbeh said.

He said that the Federal Government in two years reduced rice importation by 95 per cent and increased the number of rice farmers from five million to 30 million.

“We just have to handwork you to prosperity otherwise, this country will not grow. My wish for you is to have a better time that we had,’’ Mr Ogbeh said.

The president of GOTNI, Linus Okorie, commended the minister for sharing prosperity experiences with the youth.

Mr Okorie noted that the leadership clinic was organised by GOTNI to expose young people to practical leadership principle for life success.

According to him, GOTNI is committed to changing the narratives of poor leadership in Nigeria by consciously developing the capacities of generational leaders.

“A lot of young people are asking questions, seeking answers to their questions, wish that they have an experienced person who will hold them by the hands and show them the way to achieve success.

“There are a few people that are readily available to do this; a lot of them are making decisions everyday on the basis of their limited exposure.

“If Nigeria must make progress, if we must consciously build the next generation of leaders then, we must expose these young people to experienced leaders that have gone ahead for a conscious transfer of knowledge and experiences,’’ he said.

Some of the youth who spoke at the meeting called for continuous mentorship from leaders, access to finance and low interest rates to assist them in businesses.

GOTNI is a non-profit youth leadership capital development organisation with a passion to nurture various categories of young people under 40 years of age, into transformational leaders.