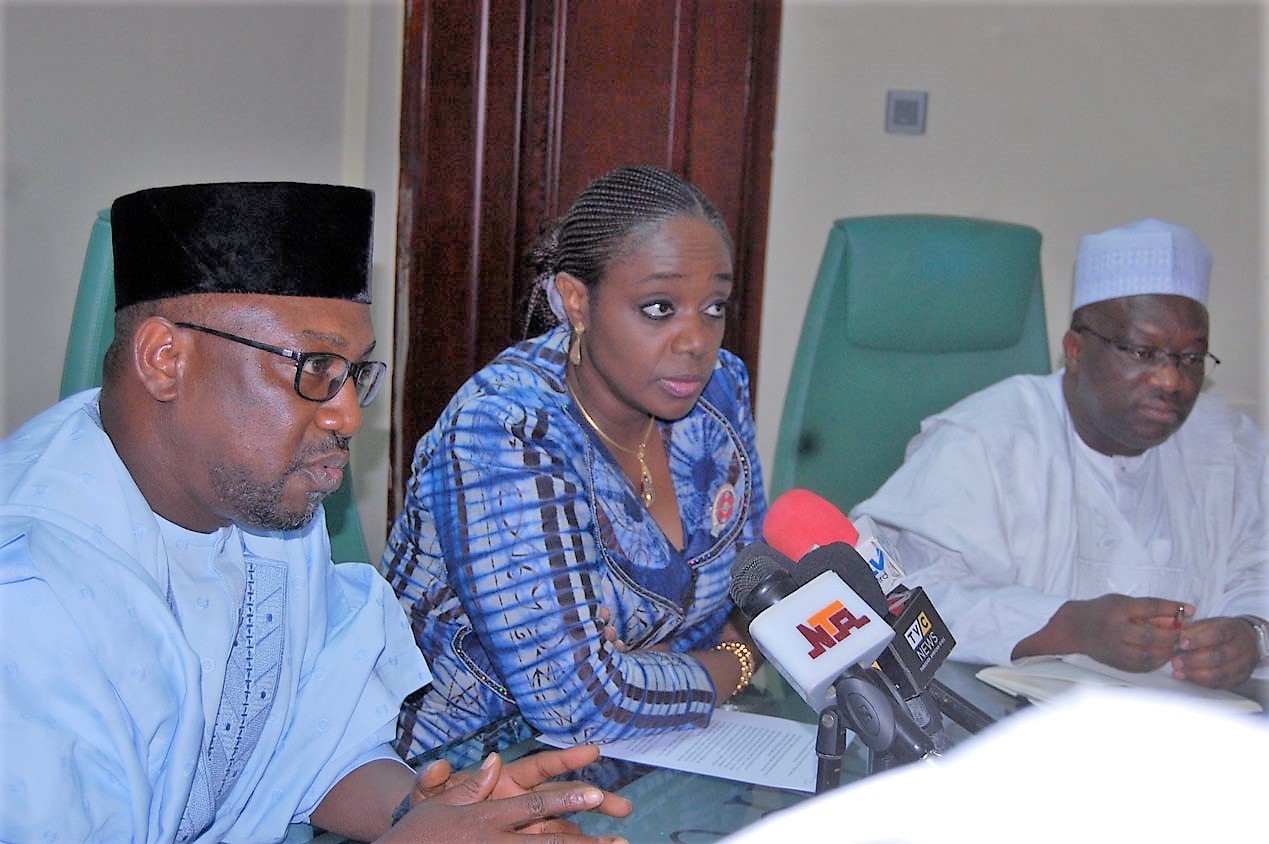 Niger State Governor, Abubakar Bello (From Left) with Minister of Finance, Kemi Adeosun and Permanent Secretary, Federal Ministry of Finance, Mahmoud Isa-Dutse, during a visit by the governor to the minister in Abuja on Monday

The Niger State Government wants the federal government to intervene over perceived annual loss of over N12 billion from wrong remittances of taxes paid by workers residing in its domain, but working in the Federal Capital Territory, Abuja.

The state governor, Abubakar Bello, told the Minister of Finance, Kemi Adeosun, on Monday during a visit to her office in Abuja that the state has been losing an average of N1 billion monthly to wrong tax remittances.

“Over 95,000 workers, in both the public and private sectors, who reside in Niger State work in Abuja. However, their taxes are not paid to the state government, but to the Federal Capital territory, FCT,” the governor told the minister.

“This is an injustice the state feels should be corrected. It has affected the state tremendously, especially in the areas around Suleija and environs, as a result of the number of workers who reside there and commute to work in Abuja every day. The immediate problem has been a lot of pressure on the infrastructural facilities in the state.”

Although the governor said the state currently earns about N400 million monthly from internally generated revenue, IGR, sources, he said his administration believed if the issue was redressed, it would boost its revenue base and help bridge the budget financing gap it has grapple with every year.

The governor, who was accompanied by some members of his cabinet, requested the minister to direct the Accountant General of the Federation, AGF, to ensure that henceforth tax deductions from salaries of workers residing in Niger State should be paid to the state for the sake of equity and fairness.

“We want the government to correct the injustice as a result of these abnormality that has affected the state over time. It is important that we at the state level increase our revenues to block the gap in terms of financial deficit, so that we can fund our budget.

“We have done enumeration of the situation. It is very clear that a lot of taxes due to Niger State were being paid to the FCT. Niger State is close to about 90,000 square kilometres.

In her response, Mrs. Adeosun admitted that losing the estimated N1 billion in revenue every month was huge and assured that she would liaise with the office of the Accountant General of the Federation to ensure that, ”the correction was done.”

“One of the fundamental issues with tax payment is the link with services. The person paying tax must see the services they are getting from the money realised. If those taxes are going to the wrong places, that link is broken.

“Nobody would be willing to become tax payers if they do not see where those monies they are paying become useful. Losing N1 billion a month is a lot of money being paid by people residing in Niger, but remitted in error to the FCT,” the minister said.

While commending the state government for focusing on other sources of revenue, Mrs. Adeosun said this was what states were expected to do as part of efforts to realise the goals of the fiscal sustainability.

She cited a similar situation between Ogun and Lagos States, which she said was resolved through the application of the provisions of Section 41 of the personal income tax law that taxes should be paid where the tax payer resides, not where they work.

“It’s a genuine mistake that should have been addressed by previous administrations. It’s good that the state government has done the enumeration and come up with the facts and figures.

“My advice is for states to liaise with the office of the Accountant General of the Federation and IPPIS (Integrated Personnel Payroll Information System) to ensure that their taxes were disaggregated, and Niger State’s would be paid to Niger and those in the FCT would be made to pay to FCT.

“Other states bordering the FCT, like Nassarawa may also be affected. Your enumeration efforts should also extend to agencies that are public, like CBN, NDIC, NCC that have their different payrolls and employers, both in the private and public sector as well as the diplomatic community.

“We will do the right thing. We don’t want to deprive anybody of their right. There must be a link between people’s services and tax payment and their standard of living. That’s the only we can encourage people to pay tax. If people pay tax and can’t see any improvement in their lives, it becomes very discouraging,” the minister said.