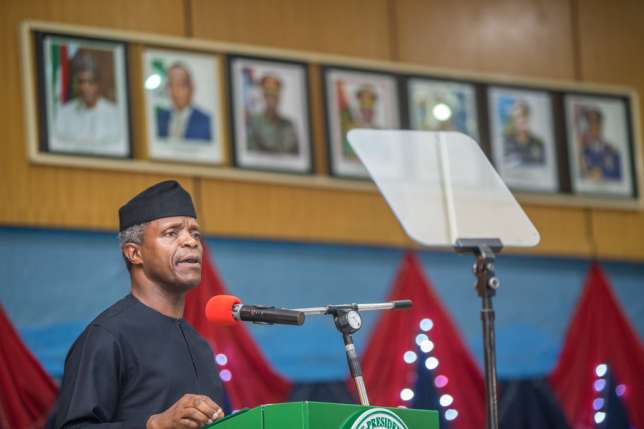 Nigeria has increased its power generation capacity above 7,000 mega watts, although challenges persist with distribution to consumers, Vice President Yemi Osinbajo has said.

“Government is dealing with the constraints of power distribution to ensure generated power get to the consumers. The Nigerian Electricity Regulatory Commission, NERC is working on an arrangement to ensure independent power distribution companies to sell power directly to metered customers.

“This will not only help realize the 10,000 MW generation capacity envisaged in the ERGP, but also build to deliver that capacity to customers,” he said.

Resolving the challenges in power generation, he said, was part of the government’s efforts to develop the infrastructure necessary to sustain the growth of the economy following the exit from recession in the second quarter of this year.

The Vice President highlighted some of government’s achievements since last years’ Economic Summit to include the resolution of the foreign exchange crisis and the restoration of stability in supply to investors and small businesses.

“The issue of scarcity of foreign exchange last year has not only been turned around, but has stabilized, with foreign reserves rising to over $32 billion, with end users having increased access to foreign exchange to do their businesses,” he said.

“The inflows into the economy from remittance by Nigerians have increased to about $1.8 billion, almost doubling the figure realized from the first quarter of this year, with the Anchor Borrowers Programme benefitting over 200,000 small-scale farmers, with over N43 billion of new investments from local investors.

“We are moving steadily towards self-sufficiency in rice production, sorghum and many other products that are vital to the country’s food security aspirations and exports. The N-power programme for unemployed graduates has employed already 200,000 graduates and another 300,000 are set to be recruited for this current phase.”

Mr. Osinbajo also said the country had recovered a significant amount of crude oil production lost last year as a result of the crisis in the Niger Delta region.

From daily loss of over one million barrels of oil last year, the Vice President said the series of engagements initiated by government led to the restoration of oil production to over two million barrels per day.

He said the government will sustain the process of diversifying the economy, with the agricultural sector creating jobs, providing raw materials for manufacturing companies and helping earn foreign exchange for the economy.

The chairman of the board of directors of the Summit, Kyari Bukar, said this year’s Summit was building on the gains of last year’s NES#22 theme of “Made in Nigeria”, which focused on the need to revitalize the economy through strategies that promote inclusive growth as well as higher levels of broad-based production and consumption.

He said the NESG would continue to remain a viable ally of government in the development of the economy, saying its 10-policy Commissions have continued to work with the various Ministries, Departments and Agencies to actualize the NERGP, expand economic opportunities, improve productivity and create jobs for Nigerians.

The Minister of Budget and National Planning, Udoma Udoma, said the NESG had continued to provide a useful platform for the public sector to engage with the private sector, development partners, academia, and Civil Society Organizations, on ways of working together to achieve faster economic development, and generally to improve working relationships.

He said government cannot to allow the implementation of the ERGP to fail, adding that the summit was a forum to strengthen its partnership with private sector towards its success.

“We are ensuring that our annual budgets are aligned with the ERGP so that government spending is driven by the Plan,” he said. “In addition, we have set up a special implementation unit to ensure effective delivery of the Plan and have also engaged staff to drive the process.

“The focus of this year’s summit is therefore implementation and that is why the theme: “Opportunities, Productivity, and Employment: Actualizing the Economic Recovery and Growth Plan,” he said.

Average retail price of kerosene up 136% in one year

Prices of 5kg cooking gas up 27% in December – NBS