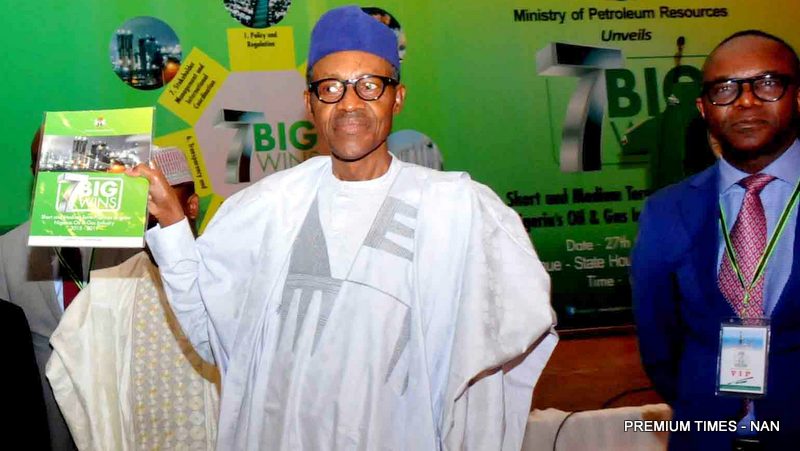 The seven big wins to revamp and revive the sector will focus on key areas including Niger Delta development and security of the oil producing region; policy and regulation; business environment and investment drive;‎ transparency and efficiency; stakeholder management and international coordination; gas revolution, refineries and local oil production capacity.

Unveiling the document in Abuja on Thursday, the president noted that the oil and gas sector was still a critical revenue point for the country despite the drastic dip in global crude oil prices at the international market.

“As important as it is to ensure that Agriculture, Solid minerals and other critical sectors of the economy are supported to grow and contribute more to the nation’s economy, we still need a virile and efficient oil and gas industry to take care of our foreign exchange requirements,” he said.

From an average price of about $100 and above per barrel two years ago, the price of crude oil dropped to below $30 last year, throwing the country into a tailspin in terms of revenue to implement its policies and programmes.

The situation became so bad that government that government considered selling some national asset to raise funds to finance its business, amidst stiff oppositions by Nigerians.

The situation worsened with a new wave of sabotage of oil production facilities following series of attacks by armed militant groups in the Niger Delta led by the Niger Delta Avengers.

Following the attacks, oil production and exports was cut to almost half, from an average of 2.1 million barrels to about 1.1 million barrels, with the armed groups unwilling to embrace dialogue on their demand for improved share of the oil wealth to the oil producing communities.

The crisis in the oil producing region has forced oil multinationals to reconsider their Nigerian operations. Some of them are divesting from Nigeria, with a lot of their workers, particularly those on contract employment, either being sacked, or the renewal of their appointments put on hold till further notice.

The Petroleum Industry Bill, which is supposed to address legislative limitations of petroleum sector laws, has been stalled at the National Assembly more than three years since it was sent there by the executive.

At the unveiling of the roadmap on Thursday, the president urged the Ministry of Petroleum to ensure that it delivered on the expectations contained in the document to bring about the speedy development of the oil and gas industry.

The Minister of State for Petroleum, Ibe Kachikwu, who gave a breakdown of the big wins, said it was time for Nigeria to take drastic steps to fix the sector.

The implementation of the wins would increase government streams of income and ensure a zero tolerance level for militancy in the Niger Delta, he said.