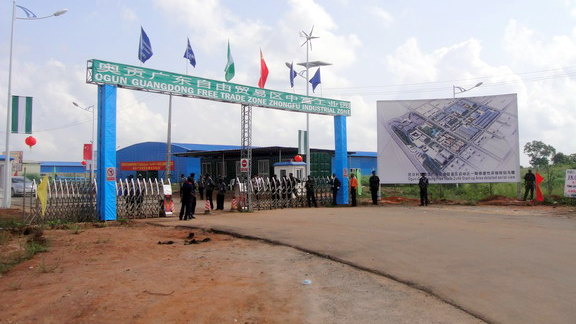 Save us from Ogun government, Chinese firm writes Buhari

A Chinese firm, Zhongfu International Investment, operating at the Ogun State Free Trade Zone in Igbesa Town of the state has petitioned the Presidency to wade into the crisis between it and the Ogun State Government. The firm said the Ogun government wrongly sacked it from operating in the zone.

In the petition, signed by Jason Han‎, the Managing Director‎ of Zhongfu International Investments, the firm said it had invested huge amount into the project before the government replaced it with another one.

“I write this letter with sorrow and despair. In 2010 my firm, Zhongfu International Investments (Nig.) FZE (“ZIIN”) came to the Ogun Guangdong Free Trade Zone in Ogun State (the “Zone”) as an investor. The Zone was devoid of basic infrastructure for industry. We assisted the then manager (China-Africa Investment Co. Ltd. (“CAI”)) to stabilize the Zone by significant cash investment. By 2012 the project had failed and the Ogun State Government (the “OSG”)terminated the appointment of CAI,” Mr. Han said in the letter.

“At this stage there were only 5 operating tenants of which ZIIN was by far the most significant investor. In March 2012, we were called upon to rescue the project as interim managers. In September 2013, we were granted a permanent arrangement when we entered into a joint venture agreement (the “JVA”) with the OSG and a Nigerian company.”

The official said in pursuant to the JVA, the company agreed to develop and manage the zone in return for a 60 per cent equity participation. He added that the JVA gave them the confidence to invest their monies as a long-term investment.

“After investing over $60 million (Sixty Million United State Dollars) and the Zone is starting to generate a cash flow, the OSG is attempting to unilaterally terminate our contract, force us to abandon our investment and flee for our lives,” the company told the President.

“Before explaining our situation, let me begin with the positive story that was unfolding in early 2016 before the intimidating actions of OSG took place, and our efforts to expand the Zone and create thousands more jobs came to an abrupt halt. We have made tremendous sacrifices to give the Zone the high profile it now enjoys in the international investment scene.

“This year, we began to see a steady cash flow to the Zone as we attracted many new investors to establish factories in the Zone. We then began the time-consuming process of reaching out to international capital markets to prepare the Zone for financing for massive infrastructure upgrades, seeking an initial estimated $250 million (Two Hundred and Fifty Million United States Dollars) from the international capital markets for the expansion of roads, electricity, transportation, and housing improvements,” the appeal letter reads.

Mr. Han explained that in the course of company’s fund development efforts in 2016, the management received acclaim from investors in China, USA, Middle East and from renowned institutions such as the World Bank, Harvard, Yale, MIT and John Hopkins universities.

He said the company’s success includes the hundreds of millions of Naira it has  generated for the Nigerian Customs, NEPZA and other government agencies. It said it also generated wealth in the surrounding areas of the zone and created over 5,000 jobs for Nigerians.

According to the company, these results have been achieved because of its relentless effort to create a supportive environment for industries and the personal sacrifices it has made. It said since December 2012, the company has worked almost continuously in developing the Zone.

“We felt some satisfaction when The Economist publication did a programme on the Zone that was aired on CNN in March 2016. ‎We felt proud when you visited China in April of this year and we signed an MOU with a prospective tenant for a USD 1 billion pharmaceutical park in the Zone,” the company told President Muhammadu Buhari.

“However, instead of growing our business, our work has stopped, the contracts we had in the pipeline have been suspended, we live in fear of our lives and others have taken over facilities and assets that we invested our own funds in acquiring.

“On Saturday 28 August 2016 you ‘strongly assured’ existing and prospective foreign investors that their investments in Nigeria will be fully secured and protected. We are experiencing a foreign investor’s worst nightmare. Our contract that is governed by Nigerian law is being treated with impunity, the Nigerian legal process is failing us and we desperately need your protection,” Mr. Han said.

“Lies have been told about us resulting in the authority of the Nigerian Police, a Magistrate Court and the OSG being manipulated and abused to inflict fear, distress and suffering on me and my staff. A contractual dispute that is a civil matter under Nigerian law and should be resolved in accordance with due legal process has become a basis for thuggery and incarceration,” the letter emphasised.

“The OSG has maintained that our JVA was terminated because they were following instructions in a letter from the Economic and Commercial Section of the Consulate-General of China in Nigeria (the Consulate Letter). The Chinese Government will not disrespect Nigerian law. The Consulate Letter has been misconstrued and overlooks the existence of our contract with the OSG. We made every effort to resolve this matter amicably as a contractual dispute but in flagrant disregard of Nigerian law, a gentleman acting on behalf of the OSG went to the Zone with an armed policeman to scare us away and install new individuals as managers of the Zone.

“They have taken over control of facilities that we built forour own exclusive use, appropriated our property and harassed our staff. We have commenced proceedings in the Federal High Court in Abuja. However OSG and the individuals harbouring plans to appropriate our investment are seeking to frustrate our legal action by forcing the recognition of the impostors irrespective of the impending court hearing.

Mr. Han also noted in the letter that he was disappointed to see that a Chinese national, Wang Junxiong, had misled and instigated the Nigerian Police and a Magistrate court to issue a warrant to arrest Mr. Zhao, the company’s administrator on trumped up allegations of “criminal breach of trust”.

He said the company administrator was detained for over 130 hours on totally baseless contractual allegation. He pointed out that Mr. Wang has in fact breached his contract with ZIIN and owes the company enormous sums of money.

“The Nigerian Police and legal system has been surreptitiously used as an instrument for terrorizing foreign investors. This abuse of legal process and disregard of legal contracts is what keeps investors away and accounts for Nigeria’s low standing in the ease of doing business rankings. (World Bank 2016 study ranked Nigeria 169th out of 189 globally, worse than Sudan, Zimbabwe, and Iraq),” the letter stressed‎.‎

The investor said he was writing the President because he believed in Nigeria and had always promoted Nigeria among foreign investors. He said Nigerians have supported him through this traumatic ordeal and “are fighting for us.”

“We are appreciative and will continue to stand for the goodness, courage and loyalty of Nigerians. Nevertheless we must defend our contractual rights in Nigerian and foreign courts. We are conscious of the embarrassment that this case may bring to Nigeria and consequently, seek to minimize the discomfiture by a speedy resolution.

“We regret that innocent Nigerians may have to bear the burden of the substantial damages that we will undoubtedly be awarded in legal action against the OSG and others. We implore you to intervene. Please show the world that Nigeria respects law and order by procuring the reversal of the forceful occupation of our property, the forceful removal of our management rights and the withdrawal of the warrants for arrest issued in abuse of legal process.

In response to the firm’s statements, the Ogun State Government in reaction on Sunday refuted the claims that it unilaterally terminated the contract.

The Secretary to the Ogun State Government, Taiwo Adeoluwa, said, “there is no truth whatsoever to the allegations raised by Dr. Jason Han, Managing Director of Zhongfu International Investments (Nig.) FZE, in an open letter to President Muhammadu Buhari.”

He said “the Chinese government, through a Diplomatic Note 1601, dated March 11, 2016, notified the Ogun State government that the Guangdong New South Group (rather than Zhongfu International Investments) are the ones authorized to manage the Ogun Guangdong Free Trade Zone.”

He added that through the Diplomatic Note, “the Chinese Consulate stressed further that to continue to allow Zhongfu International Investments to manage the zone would amount to encouraging and abetting a private company to perpetuate fraud on the government of Guangdong Province, China (the original joint venture partners to Ogun State on the project) and its lawful successors in title, the Guangdong New South Group.”

Mr. Adeoluwa said concerned about the weighty nature of issues raised in the Diplomatic Note, the Ogun State government called for explanations from both the New South Group and Zhongfu International Investments.

“The New South Group provided evidence, corroborated by the Chinese Consulate, that they bought 51 per cent of the equity of China Africa Investment Limited, the official representative of the Guangdong Province of China on the Zone and with whom the Ogun State government originally signed a Memorandum of Understanding,” he said.

“By virtue of the lawful equity transfer, they succeeded to ownership and management rights of China Africa in the zone. They further contended that the new agreement signed by Zhongfu International Investments with the Ogun State government in 2013, was procured by fraud and criminal misrepresentation for reasons that Zhongfu International Investments Limited, who was merely a tenant on the zone, deliberately concocted lies to mislead the Ogun State government into believing that it was the lawful successor to the equity ownership of China Africa Investment Limited,” Mr. Adeoluwa said.

He said apart from the company’s inability to provide evidence to back its own claims, Zhongfu International Investments has so far demonstrated a rather strange unwillingness to approach either the Chinese Embassy or Consulate in Nigeria or better still, visit the Guangdong Province, China, to immediately resolve the dispute.

“One would have thought that the Embassy or Consulate, whose basic duty it is to protect the interest of Chinese nationals in Nigeria, is the quick, best and cheap forum to resolve this Chinese on Chinese dispute. But rather than do that, Zhongfu International has chosen the path of peddling lies and cheap blackmail,” Mr. Adeoluwa said.

“Contrary to allegations of arbitrariness, abuse of power and unfriendliness to foreign investors, leveled by Dr. Jason Han, Ogun State government is indeed investor friendly and happy to work with genuine investors, either from within Nigeria or from any part of the world.