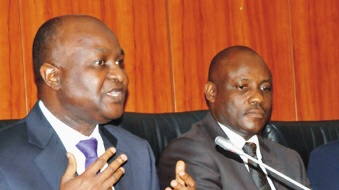 The Director, Banking Supervision of the Central Bank of Nigeria, Dipo Fatokun, on Sunday said that the nation’s transactions in mobile money was worth N5 billion annually

Mr. Fatokun said this while delivering a paper with theme, ”Cybersecurity: The Need for Standards” at the Nigeria Electronic Fraud Forum, NEFF, in Lagos.

He said the mobile money space which started in the country about two years ago with 21 mobile money operators had not met the CBN’s target.

”It is not correct that we have not made progress.

”It is right that our expectations on mobile money has not been fully met and, probably, because we are very ambitious in setting the target,” he said.

Mr. Fatokun said that the CBN had noticed that most of the mobile money transactions were mainly for subscription payment and remittances by bank customers.

He added that the CBN discovered that lack of agency remained a challenge to the growth of mobile money operation, saying, ”for mobile money to be successful, you must have an agent”.

Mr. Fatokun who chairs the NEFF, said the CBN did a report and came out with some conditions on agency banking which the mobile money operators had keyed into.

He said the apex bank had also released a guideline on super-agent structure and expected that some of the telecommunication companies would serve as super agents.

”Two of the telecommunication companies already had our approval in principle, to make their agents available for mobile money,” the CBN boss said.

Mr. Fatokun also said the assessment was that the value and volume of electronic transactions in e-payment had been on the increase.

”The value and volume of fraud, though globally, is on the increase, but in Nigeria, we will count ourselves fortunate because we put so many controls in place.

”The truth is that Nigeria is not doing badly, when it comes to cyber fraud and e-banking,” he added.

He advised Nigerians to always be conscious and be aware of fraudster’ tactics such as sending e-mails and text messages to capture customers’ data, in order to hack into their accounts.

The bank chief warned that customers should always be careful about how they speak about their banks. He said the CBN needed to put necessary controls in place to avoid fraud in the e-payment space.

”We are, no doubt, aware that reviews to IT standards for the Nigerian financial industry have accommodated cyber security as a new scope to address the cybercrime challenge of banks.

”We must also remember that as the world becomes increasingly interconnected, every organisation shares the responsibility of securing the cyberspace,” he said.

He said that the Bankers Committee had approved a “World Cyber Security Financial Summit’ for the Nigeria banking industry that would hold in Texas, USA.

He added that the decision was arrived at as a fall-out from the recommendations of its sub-committee on payments and infrastructure.