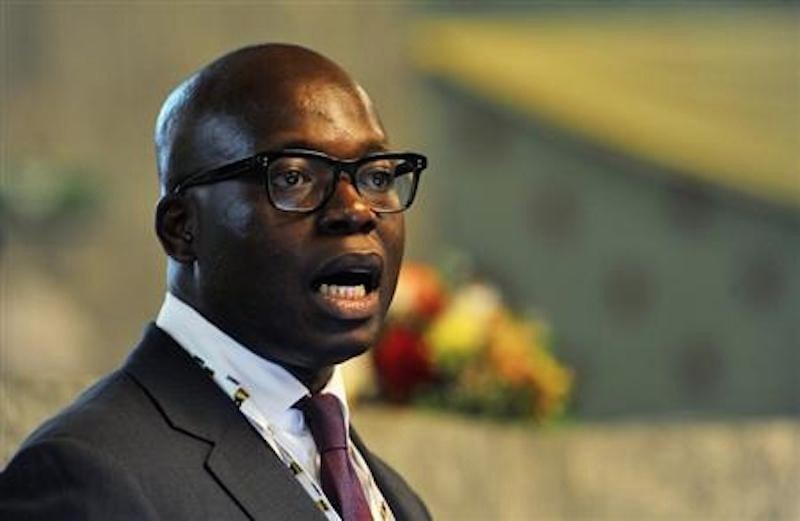 On Monday, Oando Plc announced that one of its key shareholders, Dahiru Mangal, has withdrawn his petition to the Securities and Exchange Commission (SEC), following a ‘peace deal’ with the oil firm’s chief executive officer, Wale Tinubu.

Mr. Mangal, a shareholder of the company, had in 2017 petitioned the SEC accusing management of the oil firm of gross misconduct.

The petition, together with another from Ansbury Plc, prompted the regulatory agency to suspend the shares of the company on the Nigerian bourse and, consequently, the Johannesburg Stock Exchange.

SEC also ordered a forensic audit into the operations of the indigenous oil firm.

But in a notice posted to the Nigerian bourse on Monday, the oil firm said a ‘peace deal’ had been arrived at between Mr. Mangal and Mr. Tinubu following the intervention of the Emir of Kano, Muhammadu Sanusi.

The notice said the company has been officially notified by Mr. Mangal that he is a substantial shareholder in the Company.

“In accordance with the Companies and Allied Matters Act, Cap. C20 LFN 2004 (‘CAMA’) an individual or entity with direct / beneficial share ownership over 10% constitutes a substantial shareholder in the Company,” the notice said.

“In addition to confirming his status as a substantial shareholder, all the issues raised by Alhaji Mangal in his petition to the Securities and Exchange Commission (‘SEC’) have been successfully addressed and clarified by the Company.”

On his part, Mr. Mangal was quoted to have withdrawn his petition to the SEC, saying he had agreed to the peace accord.

The development signaled what appears an end to the lingering crisis rocking the oil firm. But more importantly, it has also put in doubt the possibility of a proposed forensic audit of the company by SEC.

1. The petition by Ansbury Incorporated

Apart from Mr. Mangal, the other petition received by SEC originated from Ansbury Incorporated, owned by Gabriele Volpi, an Italian born Nigerian businessman.

In his claim, Mr. Volpi said he owned 61.9 per cent equity in the company, making both him and Mr. Mangal owners of nearly 70 per cent of Oando shares, sufficient to make them majority shareholders.

Mr. Volpi, said to have links with Intels West Africa Limited, the oil and gas logistics company, said he invested about $700 million in 2012 as a joint owner of Ocean and Oil Development Partners, OODP, the largest shareholder in Oando.

Besides, he said he contributed equity investment through OODP as the holding company in the British Virgin Islands, to facilitate Oando’s acquisition of ConocoPhillips Nigeria assets in 2014.

The Italian, who said he accounted for $900 million out of the total $1.5 billion for the deal, accused Mr. Tinubu, and his deputy, Mr. Boyo, of financial mismanagement.

On October 18, 2017 when SEC released a statement on a proposed plan to conduct a forensic audit on the operations of Oando Plc, the regulator announced that it received TWO petitions and made startling discoveries after it carried out comprehensive review of the petitions.

Now that the company says Mr. Mangal’s petition has been withdrawn, what happens to SEC’s findings with regard to Mr. Volpi’s Andsbury Incorporated’s petition?

In its response to the petition by Mr. Mangal and Ansbury Incorporated, Oando Plc accused SEC of ignoring wrongful conducts by Mr. Mangal.

“The SEC ignored the wrong doing and illegal conduct of Alhaji Dahiru Mangal in not disclosing his full shareholding interest in the Company, a proportion of which was acquired as a result of market manipulation and Insider Trading activities,” the company said in the statement signed by Alero Balogun, its public relations officer.

With the new ‘peace deal’ signed by both parties, has Mr. Mangal become immune to investigations over alleged manipulation of market rules, as earlier stated by Oando?

The aggrieved shareholders accused Mr. Tinubu of gross misconduct and raised concerns over the going concern of the oil firm.

They specifically demanded the resignation of the company’s CEO.

In October, the Nigerian bourse suspended the company and prompted the JSE to suspend its shares too.

In its notice to the Nigerian bourse Monday, the oil firm promised that subject to the provisions of the SEC Code, Companies and Allied Matters Act (‘CAMA’) and Oando’s Board Appointment Process, Oando’s Board of Directors will consider the appointment of a representative of Mr. Mangal to the Board.

Mr. Mangal was also quoted to have said that: “I am confident in the Company’s leadership team and trust that with the right support it will continue to grow from strength to strength, returning real value to all its shareholders including my good self.’’

But it remains to be seen how the ‘peace pact’ would address the concern of aggrieved minority shareholders, especially if the audit is stalled.

In September, the House of Representatives Committee on Capital Market and other Institutions asked the Securities and Exchange Commission, and Oando Plc to resolve all issues regarding the alleged N799 billion stakeholders’ liabilities with the oil firm.

At the House committee meeting where officials of the two organisations, along with some aggrieved shareholders of the oil company met, the committee members led by its deputy chairman, Tony Nwulu, lamented incessant losses of Oando plc shareholding value, which they said currently stood at N159 billion.

At the meeting, President, Rennaisance Stakeholders Association of Nigeria Incorporated, Olufemi Timothy, who led the angry shareholders to the National Assembly, accused the regulators, including SEC and Financial Reporting Council of Nigeria, FRCN, of being complacent in the discharge of their constitutional mandates, and called for an independent probe of the accounts of the company.

He alleged that the company has not been paying dividends to shareholders since 2013 financial year, adding that the “external auditor’s report indicated ‘strong doubtful going concern’ over the Group’s annual financial statement.”

In handing down the resolution, Mr. Nwulu assured that the committee would not relent in ensuring a peaceful resolution of all disagreements involving the complicity of SEC in the alleged shareholders’ losses.

But on Tuesday, after the ‘peace deal’ was announced, some of the shareholders cried out over what they described as attempts to bury the entire issue.

“The House of Representatives has issued a clear directive to SEC to investigate these infractions,” the shareholders, speaking under the aegis of Oando Shareholders’ Solidarity Group, OSSG, said in a statement on Tuesday.

“The Minister of Finance, Mrs. Kemi Adeosun, in exonerating herself from attempts to stall the forensic audit, has also stated that the Oando management has a case to answer with regards to infractions of the ISA 2007.

“We hereby call on Emir Muhammadu Sanusi not to interfere in the legitimate process of instilling sanity in Oando and in the capital market. When he meted out severe disciplinary measures against some bank CEOs in the banking industry during his tenure as Central Bank of Nigeria governor in 2009, no one interfered with his job,” the shareholders said.

The Director General of the SEC when the petitions were submitted, Munir Gwarzo, was in December suspended by the Minister of Finance, Kemi Adeosun on alleged gross misconduct.

The finance ministry in the statement signed by Patricia Deworitshe, Deputy Director, Press, announced that the officials were suspended based on corruption allegations against them.

Mr. Gwarzo had alleged that Mrs. Adeosun had asked him to step down the investigation, and instead level a fine on the company while the minister in her response, accused Mr. Gwarzo of attempting to blackmail her.

But PREMIUM TIMES has since learnt that the former SEC director general was fired by the finance ministry to thwart the audit.

Earlier, Oando had alleged on several occasions that all actions taken by the Company were predicated on its belief of bias and plack of due process and fairness in the way the SEC, under the leadership and direction of Mr. Gwarzo, carried out the investigation.

The company promptly welcomed the new SEC Director General, Abdul Zubair, when he was appointed.

The new SEC management has yet to go ahead with the audit and for weeks, officials have failed to explain to PREMIUM TIMES why the audit is still on hold.

On Monday, a source at the regulatory body told PREMIUM TIMES that the commission is being restrained to go ahead with the audit due to a court injunction obtained by the oil firm.

But another top source at the regulatory agency hinted that there are strong indications that the forensic audit may never be conducted “due to the caliber of people involved.”