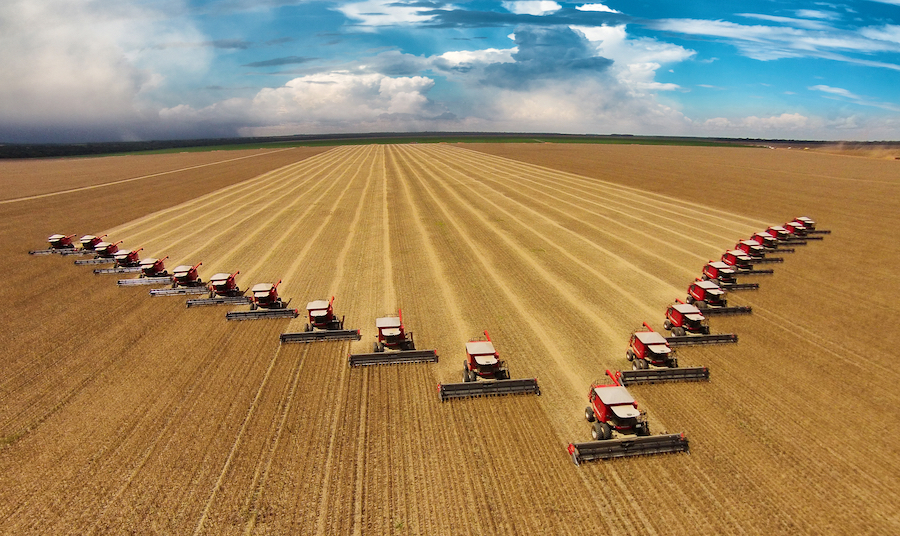 Harvesters work on a soybean harvest in the state of Mato Grosso, Brazil. (Photo: Pixabay)

Coronavirus: Another chance to transform the global food trade

For the second time this century, the interdependence of the global food supply is in sharp focus. In the first instance, the economic crisis of 2008 created high food prices and pushed an additional 100 million people toward hunger.

For many, though, that crisis neither began nor ended in 2008. Now, amid the COVID-19 pandemic, the fragility of the globalized system of trade in food is apparent again.

In addition to conflict, climate change and impoverishment, COVID-19 threatens 265 million people with famine and billions with food insecurity.

Hunger was on the rise in 2019 before the pandemic began. Despite ongoing calls for change, trade organizations and top food-exporting countries have yet to acknowledge that the current global food trade system is ill-suited to respond to local needs in an increasingly volatile world.

In the years following 2008, Olivier De Schutter, the then-United Nations Special Rapporteur on the right to food, argued that food trade should be restructured around the idea of food as a right — not merely a commodity. He advocated returning decision-making power to communities, investing in agro-ecological practices for our health and environment and moving away from a dependence on food imports.

In short, he argued in favour of transforming a system that was ineffective long before the price increases in 2008 were referred to as a crisis.

The same transformative opportunity is presented to us today.

Encouraging predictable supplies and stable markets are the stated aims of the trade system. But markets are repeatedly destabilized when financial, energy or health challenges emerge.

While the full impact of the pandemic on food security is still unknown, it’s likely to take different shapes around the world.

The logistical challenges of moving food around the world during the pandemic are exacerbated by the globalized nature of supply chains. Disruptions to planting and harvesting due to illness outbreaks have an impact on food supplies, and restrictions on the movement of migrant farm workers compound the issue as well as reduce worker incomes.

For example, grain-exporting countries like Russia and Ukraine are restricting exports due to domestic supply concerns. These types of restrictions are detrimental to countries that depend on imported food.

Restrictions also lead to price shocks; even if there’s enough food globally, it becomes inaccessible to many people. Even small price increases can push staple items out of reach. As in 2008, low-income people who spend large portions of their budgets putting food on the table are most affected.

Relying on international markets to balance supply and demand has led to food waste. This problem isn’t new, but it’s more pronounced during the pandemic. Because food production is a slow, seasonal process, it takes time to respond to shifting demands — and communicating demands is complex in long supply chains.

In response to the 2008 price spikes, tools were created to improve market transparency and policy responses in crises. But few countries from the Global South developed or participate in them — and many do not have the capacity to respond to market changes even if information is available to them.

New concerns over animal-to-human virus transmission could also have serious implications in domestic and international trade settings. Countries have curbed access to wet markets where wild animals are sold for the purpose of consumption. But if zoonotic spillover concerns are used to erect new food safety barriers, they’ll impact exporters in the Global South who are already disproportionately burdened by food safety standards set by the north.

It could also affect Indigenous peoples, who face challenges trading and sharing what is known as “country food” because of safety standards set by governments (and aligned with international standards). When food is produced, harvested and consumed locally, communities ensure culturally appropriate safety standards.

The multilateral trade focus has been on minimizing market disruptions, but fails to acknowledge that trade rules can impede local solutions. In fact, World Trade Organization leaders have actively opposed localized control over food systems; they have spoken against food sovereignty and self-sufficiency and failed to resolve disagreements over public stockholding, when developing countries purchase and stockpile food and distribute it to people in need. That’s despite the WTO admissions that food security is a legitimate objective.

The joint statement by the World Health Organization, the United Nations Food and Agriculture Organization and the WTO in March was a minor departure from the otherwise siloed approach to food in trade discussions, where food is positioned as an agricultural commodity, distinct from health, labour and the environment.

Michael Fakhri, the newly appointed Special Rapporteur on the right to food, sees the pandemic as a “warning shot” and says trade must be restructured around food security as climate change intensifies.

Fakhri suggests that the right to food can be used as a tool for civil society to engage with trade institutions internationally.

Indeed, transforming trade so that it complements rather than displaces localized food systems is the key to recognizing and honouring the right to food for people all over the world.