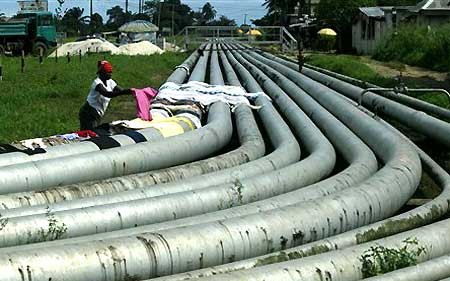 PPMC has shut down a major network that pumps petroleum products to depots in the South-West.

The Pipelines and Products Marketing Company (PPMC) says it has it shut down one of its network lines in the South-West due to an explosion in Arepo, Ogun State.

The Manager (Public Affairs and External Relations) of the company, Nasir Imodagbe,  said on Friday in Lagos that the explosion occurred on Thursday.

Mr. Imodagbe said that the explosion was caused by vandals who attempted to siphon petroleum products from the network at Arepo along the Lagos-Ibadan expressway.

The line tagged, “System 2B Network”, is the channel that pumps petroleum products from Atlas Cove in Lagos to other depots in the south-west.

He said that the explosion was reported at about 11.30 p.m., which prompted the management to shut the network lines.

According to him, the situation is being controlled by security personnel and the fire service.

“Supplies will be restored as soon as the damaged pipelines are repaired,” Mr. Imodagbe said.

He said that the explosion might have been caused by the speed boat brought by the vandals.

He was silent about causalities from the explosion.

“What I can tell you is that this is not the first time that a pipeline will explode in that area.

“It is difficult to provide security in the place because it is a swampy area.

“The Nigerian Police Force, the Nigerian Civil Defense Corps and the community’s vigilante monitor all the pipeline passing through the area,’’ he said.

He said that continuous vandalism of NNPC pipelines has remained a threat to the country’s economy and human lives.

The Chairman of the Lagos State Chapter of the Petroleum and Natural Gas Senior Staff Association of Nigeria (PENGASSAN), Folorunso Oginni, also condemned the vandalism.

Mr. Oginni said that the incessant vandalism of pipelines has prevented the NNPC from pumping products from areas of surplus to areas of need.