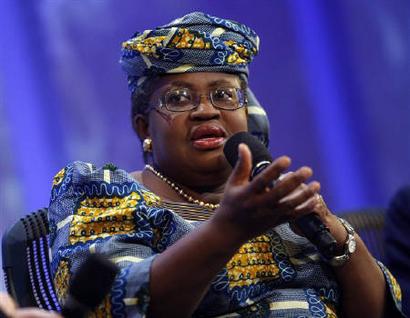 As the race for the World Bank Presidency gathers momentum, Nigeria’s Finance Minister and Coordinator for the Economy, Ngozi Okonjo-Iweala, says she is the candidate to beat in what is now a heated three way race between Nigeria, United States and Colombia.

Mrs. Okonjo-Iweala said at a well-attended press conference in Abuja on Tuesday that apart from a strong endorsement of her candidacy by the entire leadership of the African continent and the Economic Community of West African States (ECOWAS), she enjoys a broad-base support from other emerging markets and developing countries.

“Several African Presidents had called President Goodluck Jonathan to authorize my release and candidature,” Mrs. Okonjo-Iweala said. “I have met with the leadership of the African Union (AU) and ECOWAS as well as the African ministers of Finance and Economy from the continent.

“This is the nomination of the continent, with various communiqués issued to support the candidacy. Our support is broad-based, even beyond Africa and other emerging markets and developing countries. This is not just about Africa. Many people feel they need to see a voice and a face from the developing world, who understands emerging market problems.’

When reminded of the fact that the presidency of the bank had been held by Americans since its inception, Mrs. Okonjo-Iweala said she welcomed competition, particularly from the U.S. and any other nominated candidate, saying all she wanted is “a fair and honest competition, because we are confident of our capabilities.”

On her vision for the bank if given the mandate, Mrs. Okonjo-Iweala said her focus would be on job creation for the youth as well as the development of a World Bank that would be responsive to the many issues of development confronting the developing economies.

“Given the opportunity, I will bring unique advantages of knowing the strengths and weaknesses of the institutions as well as one who has managed a complex economy in a developing country,” she said. “My vision for the World Bank is an institution that is swifter and nimbler, in terms of tackling what is considered the singular most difficult problem confronting both developing and emerging market countries today, which is job creation, particularly for youth.

“We need an institution that can deploy those financial instruments and knowledge to tackle problems of both human and physical infrastructure as well as climate change and other cross sectoral issues that confront many countries today as they manage their economies these days.

“It is the World Bank, with all its knowledge, finance and technical assistance instruments than can work on the big problems that developing world confronts. This is what I would bring, with practical experience and knowledge, both inside and outside the bank,” she said.

The World Bank, she noted, has the ability to combine the strengths of the group with those of the other institutions, like the International Finance Corporation (IFC), to help developing countries solve these problems, by creating an environment that the private sector can become the creator of jobs.

Besides, she says she is  dreaming about an institution that can work fast to support countries in times of uncertainties and volatility, such as Nigeria is facing now with the global financial and economic crunch.

The candidate was accompanied to the briefing by the former Minister of Finance and Nigeria’s representative on the Board of the World Bank, Mansur Muhktar as well as a Director in the Federal Ministry of finance in charge of International Economic Relations, Farouk Mohammed.

Mr. Muhkta extolled the virtues of Mrs. Okonjo-Iweala, saying apart from her sterling credentials, she enjoys the goodwill of the entire continent, adding that her experience at senior management levels at the World Bank and in Nigeria puts her in a vantage position above others.

“Her passion to development and integrity exhibited in her career spanning over two decades puts her out as a very credible candidate” he said. “The World Bank is important in supporting the transformation of African and other developing economies as well as emerging markets.

“The shareholders of the World Bank are committed to an open, transparent and fair selection process, and we would expect that this would be the case. If this is so, we stand a very good chance, because I have got the credentials, which many people believe are very strong, to do the job. If there is no level playing field, then we have to see what happens. But, we are hoping for level playing field.”