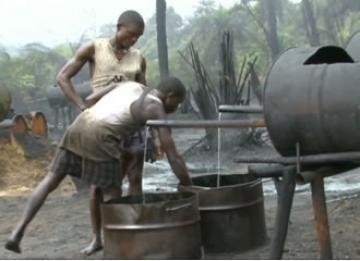 Illegal refineries are proliferating all over the Niger Delta

The Abia Commandant of NSCDC, Nathaniel Ubong, paraded the suspects before newsmen on Thursday in Umuahia.

He said they were caught by the combined team of Anti-Vandal and Rapid Response Squad of the command in Obiakpo-Obuzoukwu in Ukwa West on Feb. 27.

Mr. Ubong said the team had also impounded one Mercedes Benz vehicle with Registration Number; Rivers XA275GGU, laden with about 5,000 litres of substance suspected to be adulterated fuel.

Other items seized from them include one L-300 Mitsubishi bus (Registration number unknown), 30 metal sheets used in the construction of refineries, a long hose and empty drums.

The NSCDC officer said that the arrest followed a tip-off received from a patriotic Nigerian by the command.

Mr. Ubong said the NSCDC officers had discovered five illegal refineries in the same community in the course of the raid.

He suspected that they might be stealing crude oil from Shell oil location in Owaza, since it is the nearest location where crude oil is exploited round the place.

On the next line of action, he said “the suspects are still undergoing interrogation, but as soon as we are through, they will appear in a Federal High Court.”

He then warned those tampering with crude oil and oil facilities in parts of the state to desist from it, adding that “the command has zero tolerance for criminalities and will track them down.”