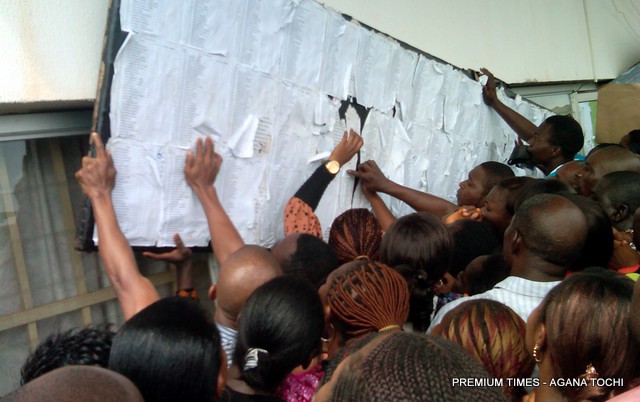 Nigerians react as unemployment grows by 4.3%

As expected, mixed reactions on Thursday trailed the latest Nigerian Unemployment/Underemployment Statistics Report released on Wednesday by the National Bureau of Statistics (NBS).

Some respondents who spoke with PREMIUM TIMES on Thursday said considering the reality most Nigerians are facing, the NBS report cannot be faulted. Yet, others simply dismissed the report as “fictional”, “panel beaten” and “screwed up” compilation to make a bad situation look presentable to the government.

The report, which highlights the country’s unemployment and underemployment figures between 2017 and 2018, revealed the rate of unemployment grew from 18.8 percent to 23.1 per cent over the period.

According to the report, the number of people classified as unemployed grew from 17.6 million in the last quarter of 2017 to 20.9 million as at the third quarter of 2018.

Of the 9.7 million unemployed that did nothing as at the third quarter of 2018, 90.1 percent, or 8.77 million were reported to be unemployed and doing nothing because they were first-time job seekers and had never worked before.

The NBS said the 9.9 percent, or 900,000 of the 9.7 million considered unemployed reported they did nothing at all, because they were previously employed but lost their jobs at some point in the past.

In other words, the report only about 900,000 of the unemployed people lost their jobs and remained without any work in the Nigerian economy in the last one year.

To be considered unemployed, the NBS relied on the International Labour Organization (ILO) definition, which says the person must not only fall within the current labour force age population of between 15 to 64, but must be willing and able to work for a minimum of 40 hour per week, but have no work to do.

According to the NBS, economically active or working age population in the country (15 – 64 years of age) increased by 4.4million in the last one year, from 111.1 million in the third quarter of 2017 to 115.5million in the corresponding period in 2018.

According to the NBS, those considered unemployed covers persons (aged 15–64), who during the reference period were available for work, actively seeking for work, but were without work.

To be considered underemployed, the NBS said the person must have worked for less than 40 hours a week, even if he has the requisite skills and competence and belongs to the active labour force bracket in the country’s population.

The Bureau said non-labour force includes population aged below 15, or older than 64, as well as those within the economically active population, who are unable to work, not actively seeking for work or choose not to work and/or are not available for work.

Those in the non-labour force include voluntary full-time housewives, children aged 14 and below, adults aged above 65, full-time students, those in active military service, physically challenged and incapacitated persons whose incapacitation prevents them from working.

People in employment since 2015

Similarly, the NBS said the cumulative number of people in underemployment, including those in part-time employment who did nothing at all, or worked under 20 hours a week, stood at about 9.03million in the third quarter of 2018.

Unemployment in the last one year

The report has generated varied reactions from Nigerians who are confronted by a reality of not only unemployment but loss of jobs.

For the Lead Director, Centre for Social Justice (CENSOJ), Eze Onyekpere, although the reality is that the rate of unemployment has increased over the period, nobody can NBS fault report.

“Yes, in terms of absolute numbers, most Nigerians would expect many people to be recorded as unemployed. But, the truth is that the NBS report was based on certain criteria, including those set by ILO (International Labour Organisation),” he said.

Regardless, Mr Onyekpere said the sad thing is that Nigerians have been calling for this report for a long time until now.

“We should take the report as it is. NBS has been a credible agency all along. The numbers may not tally with the reality of the Nigerian situation, because there are much more Nigerians who are unemployed. But, that is what it is,” he said.

“It is to be expected,” he told our reporter. “A country whose growth is lower than its population, something must suffer. In Nigeria’s case, it is employment. We seem to have lost more jobs than we have created.”

While the government has adopted a direct method of injecting finance into the system, he said most micro-finance banks, whose core responsibility is to provide micro-finance options to small and medium enterprises are not doing so.

“Agriculture, which is the main focus of government for job creation, is not made to attract young graduates. Again, the kind of education system in the country does not prepare young people to be entrepreneurial. All these have implications for the job market,” he said.

The chief executive, CEO of Global Analytics Consulting Limited, Tope Fasua, said apart from the latest report coming after NBS was prodded by Nigerians, statistics in the country are “totally screwed up”.

“Whatever the NBS has put out has been panel-beaten,” said Mr Fasua, who is contesting the 2019 presidential election.

He said he has always been opposed to NBS’ position not to consider the informal sector in computing unemployment data, pointing out that the figures cannot add up with government data alone.

“There are a lot of figures moving up and down that have made the NBS reports look fictional these days.

“What happened this time is that the NBS has not been able to find a way of cooking the current unemployment data, considering that no matter how it will be twisted, it would still disparage the government.

“The truth is that the realistic figures are much worse than the NBS has put out. If one looks at about the 5million people that come of the higher institutions every year who have no jobs, then one can imagine that the future is dark,” Mr Fasua said.