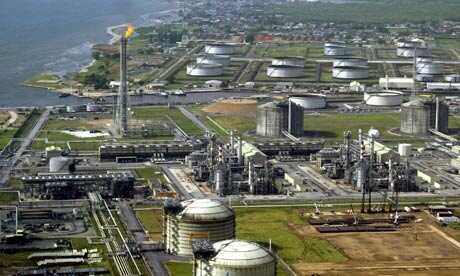 The NLNG General Manager Production, Tayo Ogini, said this on Saturday while making a presentation on the facility located at Bonny Island on Saturday.

The presentation was to acquaint the Minister of State for Petroleum Resources, Ibe Kachikwu, who visited the plant to see the progress made on the project so far.

According to the presentation, Nigeria is presently the fourth exporter of gas in the world.

The six trains have a combined capacity to produce 22 metric tonnes per annum (mtpa) of Liquefied Natural Gas (LNG).

However, plans to invest seven billion dollars on the Train-7 project would expand its production capacity to 30 mtpa making Nigeria the 3rd largest exporter of gas in the World after Qatar and Australia.

Mr Ogini said the gas produced in Nigeria was world-class, adding that the NLNG had built a reputation of reliability in its gas supplies around the world.

According to him, the hub of crude oil exporters on the island namely: Shell SPDC, ExxonMobil and the NLNG can easily produce two million barrels of oil per day.

Mr Ogini said the country had 23 NLNG carriers which had sailed more than 4,000 cargoes making it the largest in Africa.

He, however, said the companies were being faced by inadequate infrastructure, adding that with the three-year Bonny-Boro road project which the company had embarked on, part of the problem would soon be addressed.

Responding, Mr Kachikwu commended the NLNG management for its efficiency, saying the company was a testament to the fact that things could be properly done in Nigeria.

He recalled that during the cash crunch of 2016, NLNG saved the day and helped to avert a shutdown of the nation’s economy.

According to the minister of state, the Train-7 project is fantastic but Nigeria is not yet where it should be.

He challenged the NLNG to begin to think of exporting 40 mtpa over the next 30 years, as well as tackle the issue of gas pricing as most importers of domestic gas prefer to bring in shipments than to patronise the NLNG.

Mr Kachikwu, who also inspected the facility, said Nigeria’s 2019 elections would not interfere with the company’s expansion plan.

He said that whatever happened at the polls, FID on Train-7 as well as its construction would go ahead.

On NLNG assisting Brass and Olokola LNG projects, he scored the companies 100 per cent in terms of performance.

“We have opportunities that are stranded everywhere – Brass LNG in terms of shareholding and financing; OKLNG in terms of even taking off the ground.

“I am saying as the grandfather of this business – they built six trains, looking at seven, hopefully potentially more. Let’s begin to look at minimal investments, through structures and designs and reconfiguration and expert advice.

“You can actually hand-hold some of those trains that are beginning to lag behind so that the whole founding father concept of ‘take this all over the place’ can happen.

“We are going to be reaching out to them, not from an imposition point of view but from a collaborative point of view to see what we can do and learn from what they have done well,” he said.

Also speaking, the Executive Secretary, Nigerian Content Management Development Board (NCDMB), Simbi Wabote said his agency had moved to ensure the Train-7 project would be built with consideration to Nigeria’s local content law in the industry.

“We worked with them conscientiously to ensure that the FEED contract was signed within record time and we have a clear service level agreement between ourselves and NLNG to ensure that we fast-track the contracting cycle.

“This is also very important to ensure that we take FID at the end of the year as soon as we finish FEED work.

“We are going to focus more with them to ensure that the letters of the law are properly interpreted in terms of construction phase of the plant as well as its management phase,’’ Wabote said.

According to NLNG’s shareholding structure, the Nigerian government through the Nigerian National Petroleum Corporation (NNPC) owns 49 per cent of its shares.

Other shareholders are Shell Gas B.V. 25.6 per cent, Total Gaz Electricity Holdings France 15 per cent, and Eni International – 10.4 per cent.

The company also recently signed agreements with consortia to embark on FEED for the Train-7 ahead of the FID in December.

Tambuwal, other defectors will regret — Wamakko