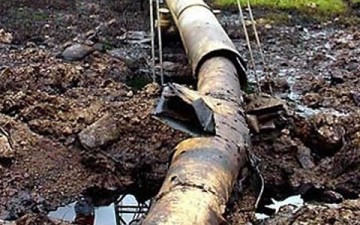 Nigeria’s dominant operator in the oil and gas sector, Shell Petroleum Development Company​,​ stretched its arrogance and disrespect for Nigeria government agencies to another level as it stayed away from a programme organized by United Nations Development Programme to mitigate pipeline vandalism.

Officials of the oil spill agency who were discussing the issue in hushed tones said the oil firm said it would have nothing to do with the agency which had ordered Shell to pay a $2.6bn fine over the Bonga spill incident of face legal action.

The Bonga Spill discharged some 45,000 barrels of crude into the Atlantic in 2011 and polluted the coastline and coastal communities in Delta, Bayelsa, Edo, River and Akwa Ibom​ states​.

Shell refused to comply with the directive and called the bluff of the regulator in the administration of President Jonathan when Deziani Allison-Madueke, a former SPDC Executive, held sway as Petroleum Minister.

Shell has the largest operations in Bayelsa and stands to benefit from any initiative aimed at reducing vandalism of oil facilities.

The National Oil Spills Detection and Response Agency has, however, commenced the implementation of community-based Disaster Risk Reduction plan aimed at reducing pipeline vandalism in Bayelsa.

The Director-General of NOSDRA, Peter Idabor, announced the implementation of the scheme in 25 Bayelsa Communities at phase two of Disaster Risk Reduction plan held in Yenagoa on Tuesday.

He said that the agency observed that the non-existence of a community-based strategy of risk reduction in oil spill management constituted a limitation in the industry.

The D-G, noted that pollution from oil exploration caused by pipeline vansalism had adverse environmental implication and threatened the health of residents.

“This has resulted in the development of Disaster Risk Reduction plan for stakeholders’ by NOSDRA in collaboration with UNDP to mitigate environmental problems.

“The pilot phase of this project was carried out between May 26 and 28, 2014, and the selected communities for the pilot scheme were the Ikarama and Kalaba communities.

“The pilot project and follow-up programmes for these communities were a huge success.

“The DRR plan was developed by NOSDRA to incoporporate and engender an interface with stakeholders that hitherto have not been engaged in the effort to curb pipeline vandalism.

“While it is true that crude oil is spilled into the environment due to equipment failure and operational negligience, pipeline vandalism by unscrupulous members of host and transit communities also contribute.

“This results to adverse socio-economic, health and environmental conditions,” he said.

Representatives of 25 communities across Bayelsa, the Bayelsa Government, Agip​,​ as well as Civil Society organisations attended the forum.

In a remark, the Bayelsa Commissioner for Environment, Iniruo Wills, who represented Governor Seriake​,​ restated the resolve of the state government to reduce disasters in oilfields within the state to the barest minimum.

He noted that pipeline vandalism was inimical to the economy as the revenue loss deprives the citizens of social amenities that would have been provided by government while enriching the oil thieves.

He said the operations of oil thieves had also resulted to proliferation of arms and creating security challenges.

He noted that the communities had endured the environmental impact of oil exploration and had to purchase refined products above the recommended process, a development that made illegally refined products attractive.

“He urged the federal government to reinstate the 10 percent equity proposed in the Petroleum Industry bill to give oil communities a stake in the oil industry.

Shell also declined to comment on the letter written by the DG of NOSDRA urging the firm to pay the fine of face further sanctions from the regulator.