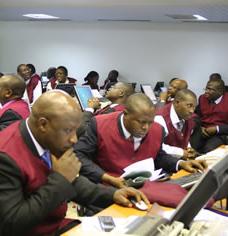 Oscar Onyema, Chief Executive Officer, Nigerian Stock Exchange, said the X-Alert is a new and improved notification system which will provide investors with details of transactions on an investment account via a Text Message on the recipient’s mobile phone or via an e-mail to the recipient’s box.

“The service which will allow the investing public know when a transaction has been made on their account, will be run in-house on behalf of The Exchange by the Central Securities Clearing System (CSCS) with reduced cost implications to both buyers and sellers in the Nigerian Capital Market” he said.

“In addition to paying a lot less for transactions, customers will have updated positions of their accounts at any point in time as this new system offers convenient and easy monitoring of all accounts. There are also the added benefits of effective fraud alert in cases of unauthorised transactions on account, reduction in time spent confirming trades and an enhancement of transparency between the trader and its clients” he added.

The Stock Exchange has been making varying changes to meet its 21st Century Technology Strategies. Recently, it rolled out its new generation Trading Platform, X-Gen, which supports the FIX protocol. According to the Exchange, X-Gen is expected to open up an unprecedented level of innovative trading capabilities for the market, providing low latency trading, straight-through processing from broker order management systems to the Exchange and direct market access for the buy-side and mobile access through smartphones to the retail investors, leveraging on the 120 million mobile phone penetration already in the country.

Contextualizing the FRC Case Against Sanusi, By Akintunde Oyebode