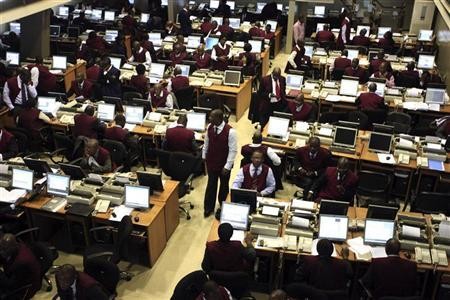 Despite the introduction of market making companies into Nigeria’s Stock Exchange, NSE, to aid liquidity, Oscar Onyema, the Chief Executive Officer of the Exchange said the Capital Market will continue to face challenges around liquidity and depth in 2013.

He however, said “there is a concerted effort to drive improvements in market participant experience” at a press conference held in Lagos on Thursday, while reviewing the market’s 2012 performance and presenting the Exchange’s outlook for 2013.

On Thursday, the Exchange announced the addition of Dangote Cement Plc, Oando Plc and Transnational Corporation of Nigeria Plc to the list of stocks in the market making programme. The new additions bring the number of stocks that have been rolled out by the initiative to thirty-nine.

Despite this, the NSE boss still highlighted liquidity and depth as part of the challenges facing the Exchange.

Last year, the NSE commenced an equities Primary Market Making program, along with securities lending and short selling; in a bid to address the nagging issue of illiquidity.

Market makers are usually companies, individuals or broker-dealer firms that are authorised to accept the risk of holding a certain number of shares of a particular security in order to facilitate trading in that security.

They compete for customers order flow by displaying both a buy and sell quotation for a guaranteed number of shares.

They are usually meant to help liquidity and keep the market running efficiently because they are willing to quote both bid and offer prices for an asset.

The issue of illiquidity however, seemed not to have derailed the Exchange from hitting some commendable targets in the past year.

Aside stalled economic activities at the beginning of the first quarter, the result of which was felt in the capital market through the first half of 2012 due to implementation of Nigerian government policy on fuel subsidy in January 2012, “there was more excitement in the second half of the year with steady growth across most sectors, and the inclusion of selected Nigerian government bonds in the JP Morgan Government Bond Index- Emerging Markets (GBI-EM)” he said.

The capitalization of listed equities grew by 37.31 per cent from N6.54 to N8.98 trillion ($57.77 billion); the NSE All Share Index (ASI) gained 35.45 per cent; and average daily turnover for equities was N2.65 billion ($17.05 million), up 2.71 per cent, notwithstanding certain prevalent, national and market-specific challenges.

The Exchange also closed the year with two (2) new equity listings on the Main Board, while the Bond market recorded an increase in the value of new issues – up 55.61 per cent, with the listing of 10 new bonds.

The NSE All Share Index gained 35.45 per cent in 2012. The Exchange’s major index closed the year with its strongest performance since 2008, while other indices topped their performance pre-global financial meltdown. However, Insurance, and Oil and Gas index fell, according to the NSE chief.

The number of listed companies and the number of listed equities at the end of 2012 were 194 and 197, respectively. While four (4) companies were delisted – FinBank Plc, through its acquisition by FCMB Plc; Ablast Products Plc; Udeofson Garment Factory Plc; and Hallmark Paper Products Plc, as a result of non- compliance with the Exchange’s post-listing standards.

“The CBN’s efforts to achieve single-digit inflation and a lower MPR should have a positive impact on the equities market. As investor confidence measures implemented by the NSE mature, we expect that a growth trend similar to that experienced in Q4 2012 will extend into 2013” he said.

Other contributing factors to optimism about the capital market, according to Mr. Onyema, include an early passage of the national budget, the pronouncement to begin investing proceeds of the Sovereign Wealth Fund (SWF) in March 2013, elimination of VAT and stamp duties, which should take effect in 2013, freeing up funds for capital market investment; and continued product innovation by the Exchange.

Bismarck Rewane, Managing Director, Financial Derivatives Company, a diversified financial institution, said the introduction of market makers is yet to change anything.

“Without adequate liquidity injection, the market makers will make no difference.

According to him, setting up a fund, 60 per cent government and 40 per cent market makers would go a longer way to restoring confidence.

“Proceeds from the fund is to be used to continuously trade in the market and boost liquidity. This will restore confidence and stabilise the market” he said.