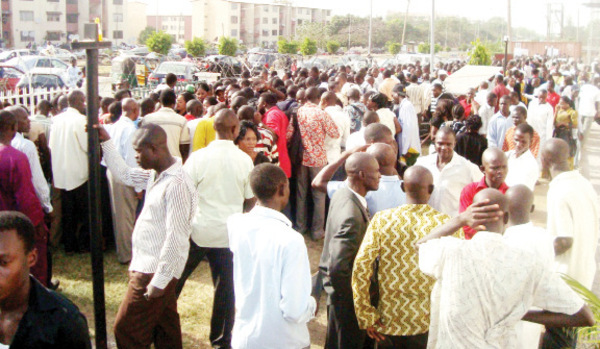 Although Nigeria witnessed robust economic growth in 2011, it is still enmeshed in poverty.

In what appears an indictment of the President Goodluck Jonathan’s administration, the United Nations, has released a report saying Nigeria’s unemployment rate has increased in the last two years under Mr. Jonathan’s watch, from 21.1 per cent in 2010 to 23.9 per cent.

The report shows that about one in four Nigerians are currently unemployed. Nigeria also has one of the worst youth unemployment rates in sub-Saharan Africa, at 37.7 per cent – which means two in five Nigerian youth are unemployed.

The publication, launched on Thursday in Addis Ababa, was presented by the Director, Economic Department, NEPAD division of UNECA, Emmanuel Nnadozie.

The publication, which is in its 11th year, however, described Nigeria’s economic growth in 2011 as “robust.”

The robust growth recorded in Nigeria’s economy, according to the publication, was driven mainly by the non-oil sector, and in particular, telecommunications, construction, wholesale/retail trade, hotel and restaurant services, manufacturing, and agriculture.

The report showed that Mr. Jonathan’s policies, despite leading to a “robust” economic growth, are spreading poverty in the country.

The Nigerian economy has failed to generate decent jobs as poverty is widespread, the publication revealed.

“Poverty is also very high and persistent. Social indicators in health and education remain weak,” Mr. Nnadozie stated in his presentation of the report.

“To mitigate the negative impacts of the global economic crisis, the government pursued an expansionary fiscal policy to maintain growth and social sector spending that led to pressure on consumer prices,” he said.

The publication showed that dilapidated infrastructure particularly in power, road transport and railways; and the overdependence on the oil and gas industry, impede Nigeria’s economy and the country’s absorptive capacity.

The findings of the report are not too far from that of the Nigerian Bureau of Statistics.

Agric Sector is getting better

The report also showed that in spite of the dominance of the oil sector, agriculture played a significant role in the national economy, accounting for the largest single share of Gross Domestic Product (GDP).

The publication gave a country by country economic performance of 54 African countries and was themed “Promoting Youth Employment”.

Mr. Nnadozie said the Republic of Somalia was exempted from the outlook because of the prevailing security situation in the country.

He, however, said with the current positive political process, Somalia would feature in the 2013 African Economic Outlook.

The central message of the publication is job creation for African youth by African governments.

Catholic Church explains clamour for return of schools to missionaries