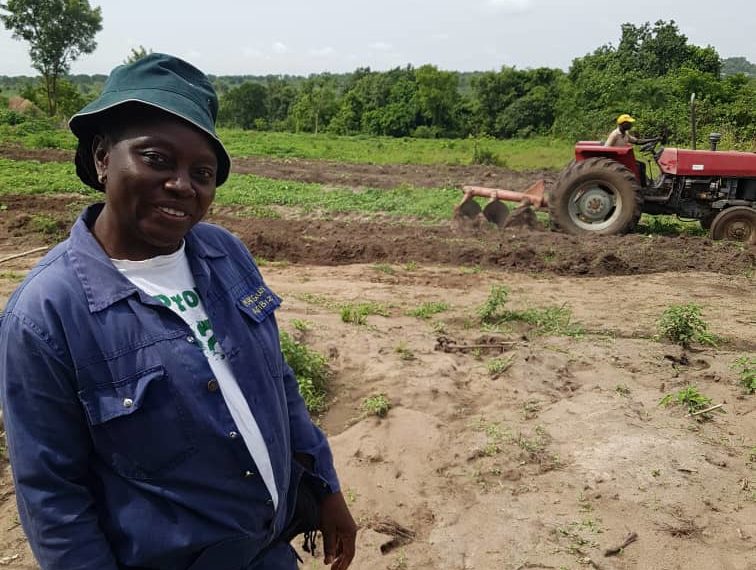 Women in Agriculture: How herders set my cashew farm on fire – Farmer

Bolanle Titilola says she lost about N15 million and could not recover it.

Bolanle Titilola is the chief executive officer of Mayegun Agribiz. She owns a cashew plantation in Oyo State, where she cultivates soybeans and maize to complement the cashew farm.

In this episode of our Women in Agriculture, she bares her mind on how she lost her crops to herders.

PT: Can you put us through your journey in agriculture?

Ms Titilola: I started practicing Agriculture in 2017. I actually wanted to do it when I was in secondary school. I studied Agricultural Economics at the University with the hope of working with farmers. Upon graduation, there was no job but I wanted to work in a very big agric firm so I can learn before I save money and start my own. Unfortunately I couldn’t.

So, someone advised me to apply for a bank job, I did and I got it. Apparently, I forgot agriculture. I left the bank after 23 years. When I left the bank, my mind didn’t go to Agriculture, I was thinking of getting a Masters degree in Education. My husband suggested I go for Economics, which I considered because it was not bad, but when I got there, the department said my result was too old, I was pissed off.

Someone then introduced me to another course. It was during my masters that the idea came back to me, to go into agriculture. Fortunately for me, my husband bought land 12 years before then but the location was far away. After some time, I considered using it because it was going to be difficult to get such size of land in an urban space, to do the kind of farming I wanted to practice.

My plan was to start a plantation. I don’t like the idea of cultivating every year. I prefer to plant something, nurture it for five years then it will start generating money for me. That’s the type of agriculture I wanted to do. I was thinking that once I establish the plantation, I will be able to help farmers. In 2017, I started farming, I planted cashew. Some people used to feel that it’s because my daughter is a farmer but it is not true. Although she started farming before me, I think she is one of the reasons I remembered that I had to go back to the farm.

I started very small, because the land is about 160 acres. I had to add maize and soya beans to it and it was profitable. I use about 70 acres for cashew.

PT: How are you able to get seeds for the other annual crops you cultivate?

Ms Titilola: I got farmers that took me to where they buy seeds locally. So I bought from the local markets. I haven’t planted locally sourced seeds but this year, I bought improved seeds. For soya beans, it has been difficult.

PT: Aside from seeds, there are other inputs for your farm, like fertilisers and herbicide. How do you access them?

Ms Titilola: Fertilizer and seeds, they are always available, if you have the money. There are varieties of herbicides farmers can use that are readily available in the market.

I have not been using fertilizer for my maize and soybeans, I have only been using it on my cashew, because it is a long term crop.

This year I am planning to do another type of cropping where I will fertilize a portion of land and cultivate maize on it, so I will check the difference between a fertilized maize and unfertilized maize. Manure is also expensive too. I am trying to be careful. To cultivate one hectare, you will use like one bag of fertilizer. You know, planting maize and soya beans is not my main focus. I’m just using it to pass time, pending when my cashew will grow. When the cashew grows into an umbrella shape, I may not be able to plant anything on the ground. The cashew has started fruiting but it is nothing to write home about because it has not gotten to its maturity stage. Two years from now, it will be very fruitful.

PT: How would you describe market presence for your crops?

Ms Titilola: For now, I don’t have a permanent off taker to sell the produce to. It is just the middle men; they cheat me a lot. They don’t use scales to measure the goods, they use measuring bags which are deceptive; I cannot ascertain the credibility of the bag.

I wish I had a connection with a company that uses maize and soybeans as raw materials for production. But, the crops are seasonal. Selling directly at rural markets is like cheating, you need to have a warehouse to store the goods and this is not easy. Mostly, I have been selling in rural markets.

PT: You spent over 20 years as a banker, then took out time to reflect on what you want to retire to. You had plans to start up something, how did you come up with capital?

Ms Titilola: I got capital from my family and friends. Who will loan you money that will wait for cashew to grow for five years?

PT: Insecurity is the talk of the day as every farmer has one way or another had a taste of it. So how has it affected you?

Ms Titilola: I am a direct victim of some of the issues regarding security. Before I started in 2017, the land has been there for over 10 years and these herders do roam the land freely over this period. When we started, I was under the impression that cows don’t eat cashews so let’s leave them to confine roaming but I was surprised when my cashews started growing. I left the farm one day and when I returned, half of the cashew was gone, branches had been broken.

I was warned by other farmers but I didn’t heed their warning saying I’ll warn the herders to roam carefully and not tamper with my cashews. But still they destroyed over half my cashew and I was really angry and sad. I had to chase them from the farm and that’s when the war started. In 2019 during the dry season, they burned down my farm and I was not close to the farm and nobody knew what happened. In 2020, I was in Ibadan and someone called me from the farm that my farm was on fire.

The herders set my farm ablaze and stood there with the cows to watch with the expectation that no one should come around that time. When they saw that people were around the farm they ran with their cows. When the fire stopped, I already lost about 5 acres of cashew. I went to the police and they kept asking me questions that I should not know. I just had to start calling other people that I know that I want to take the matter to court and that’s when the police started investigating them and arrested those involved who initially denied the accusation but after sometime, agreed that it was their children that did it. I asked to be compensated but they started calling their associations and I realised that these guys know the law, they just want to be wicked. The police tried to compromise the case but I kept calling people I know and that kept them in check.

The herders had to start begging but I insisted on getting my compensation as what I lost was worth over 15 million naira. So they kept begging and calling people to beg on their behalf. I agreed and asked them to write an undertaking that they’ll never enter my farm again, which they did. They did calm down even though they still entered each other’s farm but they were scared doing it. This year, there are no fire incidents and that’s a good thing but there is still the issue of herders on other people’s farms.

We are careful to prevent other issues that might erupt due to their misconduct and trespass. I actually thought I could leave my farm 10 years without fencing but with the fire issue and their trespasses, I started thinking of fencing which will cost over 20 million to execute.

PT: Do you belong to any farmers association?

Ms Titilola: No I don’t belong to any association. At some point I wanted to join the cashew farmer’s association but when I checked, it requires a lot of money to join them so I didn’t.

PT: How many workers do you have on your farm?

Ms Titilola: I have 3 permanent staff and an unknown number of temporary staff as they come when they are needed.

PT: Climate change is a global issue and has affected farmers and is also believed to be the reason behind herders leaving the North to the south to see if they can feed their cattles. Do you think there is something the government can do to avert this problem?

Ms Titilola: Personally, the problem we are having with herders is not a result of climate change. The clash is a result of our mindset. Government needs to reorient all of us.

PT: Agriculture is tedious, some young people have interest in it but are scared of the stress, what advice would you give a young person to begin the farming journey?

Ms Titilola: First, the person should start small, learn on the job, make mistakes and learn from them. If you have one million naira to start agriculture, use N 200,000 thousand instead. If the N200,000 vanishes, you can still use some part of the remaining money to continue the business. You will be able to master the whole thing after a while.

Forget about money at the initial stage because the first three years is a learning stage. Make proper inquiry before you embark on a farming journey.

SPECIAL REPORT: Osun in the mud as mining greed intensifies