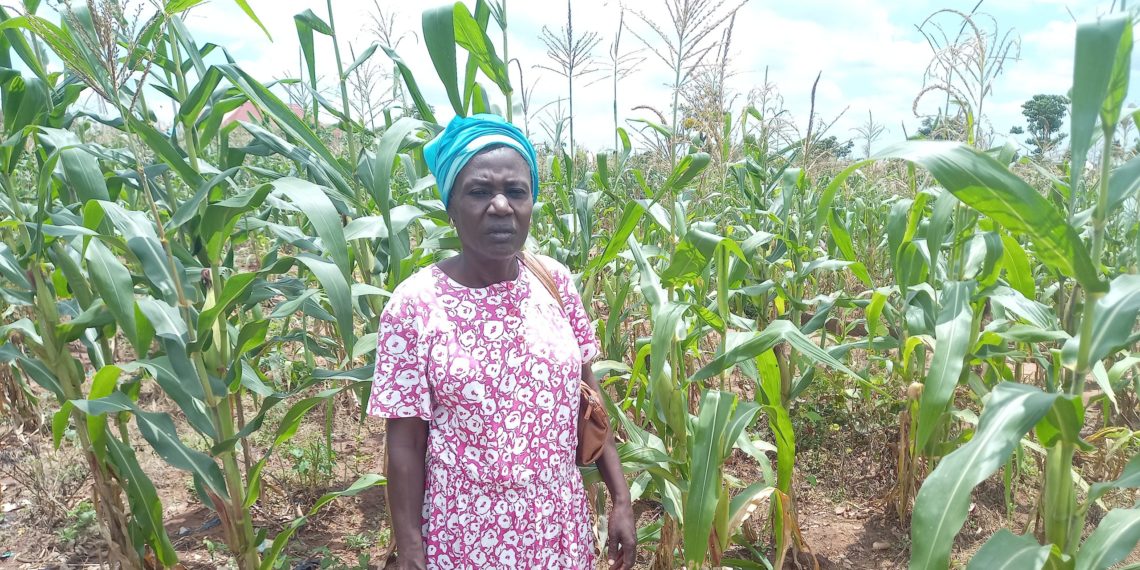 Women in Agriculture: How herders destroyed my farm for years — Farmer

Elizabeth Onyeri wants the government to intervene and help farmers with finance and security.

Elizabeth Onyeri is a small-scale farmer in Abuja. She started farming in the 1990s in Gombe State where she also worked as a civil servant, before she was transferred to the federal capital.

She says her yield was better in Gombe. Comparing both locations, Ms Onyeri raises the issues of land, finance and security as key factors in crop production.

Ms Onyeri sounds bitter about the invasion of her farm by herders in the last four years, which she said led to perpetual losses.

Ms Onyeri cultivates maize, castor, beans and rice. In this episode of Women in Agriculture, she shares her experience.

PT: Can you put us through your journey in agriculture?

Ms Onyeri: I started cultivating in Gombe State where I was working as a civil servant. I used the yield to augment my salary for the family. It was easier for me to practice agriculture there because land was very much available and I had the resources then to lease as much as I wanted. So when I relocated to Abuja, I continued my farming. I retired in 2017 so I decided to have farming as a retirement plan.

I started farming because I love it, to give me food sufficiency and money. In Gombe, I sell the produce to middle men.

But since I started farming in the Kuje area council of the FCT, it has been hell. From land to insecurity to finance.

PT: Land seems to be a huge problem for you in FCT, how do you lease land?

Ms Onyeri: I lease two hectares for N10,000; then half hectare is N3000 for one year. I have other plots of land but they are all scattered in this community. It is difficult to get a large piece of land together at a location here.

READ ALSO: Basic food out of reach of millions in 2020 – Report

PT: How do you deal with issues of seeds, machines and labour?

Ms Onyeri: I buy premier seeds for maize which costs about N7200 for six bags, for the beans I buy in mudu which costs N12000 for 12 mudu. The castor was given by the government. I pleaded for rice seeds but they didn’t give me, so when I came back, we formed an association of women farmers. We have registered it. We have requested what we want but they are yet to respond. I don’t use machines. I use human labour. There is no fixed price for labour. It depends on your bargaining power.

PT: Insecurity is a big issue, this community has been affected severely by herders. Can you tell us your story?

Ms Onyeri: The farm in the bush is where I have many complaints already. I spent a lot of money, I hired it from the land caretaker, I planted maize, I bought about six bags of that premier seed. I sprayed the place.

After 3-4 weeks, I went back there to check the progress so far, I discovered that herders had entered with their cows and eaten up everything. I actually went to see how I could plant beans on the same land, so having seen the damage, I still went ahead to cultivate beans with faith, because I didn’t want to lose the money I invested on the land.

I have another land where I cultivate cassava. I got the cassava from the International Institute of Tropical Agriculture (IITA). The land is even fenced but the herders found their way in and ate up all the crops. One day, my husband called me and told me that the crops had been eaten up, so I felt it was just that they went there and ate up the leaves. The day I was free, I decided to visit there myself, they actually uprooted the cassava, infact the farm didn’t look like we cultivated anything there.

Since 2017, whenever I plant, I don’t harvest it. They are all eaten up, so I no longer cultivate. With the efforts we have been making all these years, to improve food security, the government is not helping. There is a particular group I attend called “Citizens Engagement with the Government” which is controlled by the Bureau for Public Service Reform. I went to one of the meetings where I had an opportunity to talk. I spoke about the challenges.

Even when we call the police to arrest these herders they will not do anything, they cannot even arrest them. If they do, they will release them before the end of that day.

Look at me, a retired civil servant, I raise money to cultivate and at the end of the day, I don’t harvest anything. Is it adding to the economy of the nation or is it reducing? The government is shouting we should go into farming, how can we?

One day in 2019, some labourers and my son were harvesting beans, the herders came into the farm, then my son confronted them. One of the herders asked him in Hausa “Yaya za yi”, I asked for the translation, and my son said it means “what can you do”. They have machetes and guns with them, if you talk too much, they will kill you.

This year when the government distributed seeds to women farmers, I was fortunate to get castor seeds (even if I don’t cultivate them) I collected them. When I got back, I had to lease land to cultivate it. On that land, I decided to practice multi-cropping. I then cultivated maize there, these herders ate the entire maize.

This is the situation we are in, if there is anything anyone can do to help us, then we will be grateful. You cannot tell me that as a Nigerian citizen, that when things like this happen that I should not react. I may not react violently but I will speak. I have experienced this every farming season since the last few years. The government pays lip service to us.

The road is very bad. I cannot go out with my car. I keep using public transport to convey my products to the farm. It costs so much money. Even erosion is another challenge. It has even rendered one of my farms useless. I have to spend a lot of money.

PT: Aside from Insecurity and other challenges, have you been harassed because you are a woman?

Ms Onyeri: Yes, you know in our society, women are seen as second class citizens especially when you are coming to a male dominated profession. There was land that someone bought through my husband and I. We went there to plant, we met crops on the land so we started making enquiries so one man claimed ownership of the crops and land because he is an indigene. I then asked the man if he wasn’t compensated, the man started raising his voice asking why I should talk as a woman. My husband then got angry and started responding.

PT: Outside farming, what else do you do to earn money now that you are retired?

Ms Onyeri: I produce spices, natural spices. I get the ingredients across different parts of the country. I dry them, then grind them and sell them for use. I started when I was still in service, I produce small and sell to my colleagues. In fact, I belong to the National Spice Producers Association of Nigeria. The products are in the market. I have gotten the trademark certificate for the product. But I don’t have equipment, I need a dehydrator because sun drying is not healthy. It reduces the nutrients.

PT: What would you say is the most pressing thing you need for your business?

Ms Onyeri: Generally, I need funds and equipment for both farming and spice production. If I can buy land because I have been leasing land. I even applied for a loan last year from NIRSAL but I was not qualified. I want to re-apply.