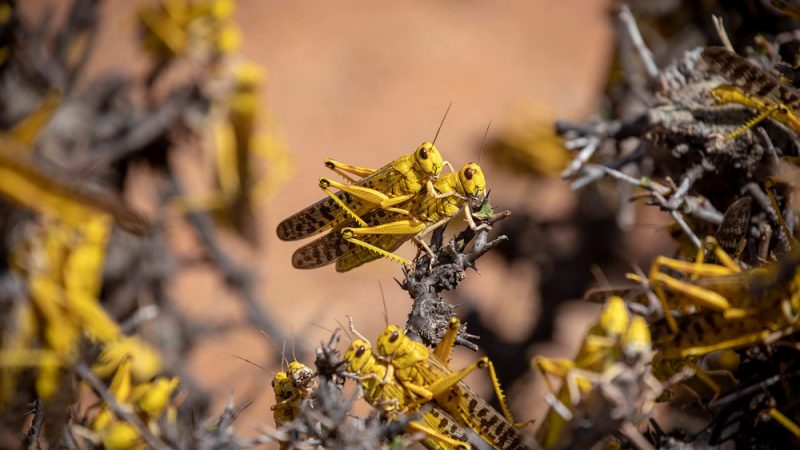 "Once swarms arrive in favourable areas, they will mature and lay eggs that will hatch and cause hopper bands to form, during February and March."

The Food and Agricultural Organisation (FAO) has alerted that swarms of desert locust are migrating and reaching new parts of Ethiopia, Kenya, Somalia and Tanzania.

According to the FAO, which says it is working to control and prevent a further upsurge of desert locust in Eastern Africa, it particularly cited the Horn of Africa, where immature swarms continue to migrate southwards from breeding areas in eastern Ethiopia and central Somalia to southern Ethiopia and northern Kenya.

The report was given under the organisation’s Desert Locust Situation Update, on January 11.

The update highlighted that there were reports that a few immature swarms reached Mwanga district in northeast Tanzania on January 8.

“In Ethiopia, immature swarms are concentrating along the eastern side of the Harar Highlands in Oromia region as they move to southern areas of the country, including southern parts of the Rift Valley in SNNP region. There are also cross-border movements near Jijiga and northwest Somalia and along the southern border with Kenya,” FAO report reads.

“In Kenya, immature swarms continue to arrive and spread throughout the north. So far, swarms are present in four counties (Wajir, Garissa, Marsabit and, most recently, Isiolo). Breeding continues, and hopper bands are present in the southeast near Taita Taveta and along the coast.

“In Somalia, mature swarms are present in the northwest and breeding is in progress on the coast where hopper bands have formed. Breeding also continues in the northeast where numerous hopper bands are concentrated between Iskushuban and Bosaso.

“Breeding may also be underway in other areas on the northern plateau that received heavy rains from cyclone Gati. Immature swarms continue to move southwards in central and southern regions towards Kenya,” it said.

Control operations continue in all affected countries, the report revealed.

“As conditions are dry in some areas where the swarms are arriving, they are expected to disperse throughout southern Ethiopia and northern Kenya. There is a moderate risk that a few swarms could reach central Kenya and perhaps the southwest as well as northeast Tanzania, eastern Uganda, and southeast South Sudan during January.

Once swarms arrive in favourable areas, they will mature and lay eggs that will hatch and cause hopper bands to form, during February and March.

“All countries should maintain maximum efforts in conducting the necessary survey and control operations to reduce migration and breeding,” the report urged.