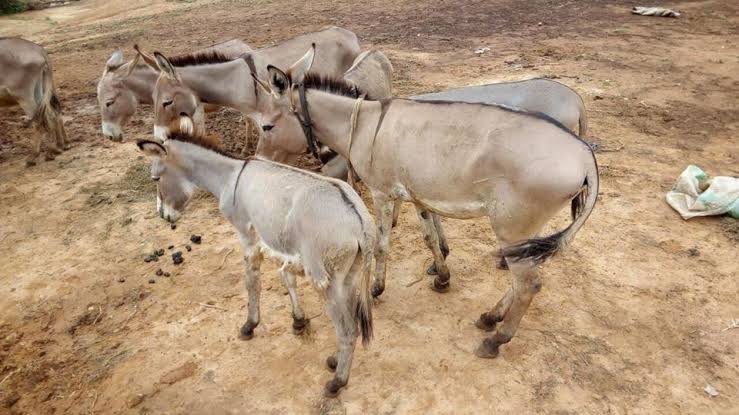 Donkeys used to illustrate the story.

Why I sponsored bill to protect Nigerian donkeys — Lawmaker

A member of the House of Representatives, Garba Muhammad, said his sponsorship of a bill to protect donkeys and ban the exportation of their body parts was to protect the animals from extinction and preserve their socio-economic roles.

The bill was passed by the lower chamber of the National Assembly on Thursday.

Speaking at an event on the impact of donkey trade on West Africa, the lawmaker said the aggressive donkey export has social and economic implications his bill sought to address.

Mr Muhammad (APC, Kaduna) said he first picked interest in sponsoring the legislation after observing the cruel treatment meted to the animals in the process of getting their skins for export mainly to China.

Another reason, he said, was the disenfranchisement of poor villages who for ages rely on donkeys for human and goods transportation.

The event, organised by The Donkey Sanctuary, a UK-based animal rights group, and Nigeria Now magazine, brought together experts to discuss the threat to the existence of donkeys and ways out of it.

“Donkey skin needs for China are 4.8 million annually and the population of donkeys worldwide is less than 40 million. With this, in the next five years you will find that the donkey population could have been decimated,” he said.

Mr Muhammad said the lifestyle of people living in rural areas is being altered as a result of the increasing incursion on the donkeys.

“Even at the United Nations, it has been recognised that donkeys are the most important and enduring means of transport to the world’s marginalised populations; the poorest of the poor.

“Their means of livelihood is independent on these donkeys.”

Mr Muhammad recalled that when he first tabled the idea of the bill before the lawmaking body last year, some of his colleagues laughed off the bill.

“Even in my constituency, some people were laughing, they said I am now a lawmaker for the donkeys,” he said.

Mr Mohammed expressed optimism that the Senate will expedite consideration of the bill for subsequent transmission to the president for assent.

“We have spoken to the Senate President and the Minister of Agriculture. The two of them appreciated [the bill]. Hopefully by next week he Bill will be presented to the Senate, after concurrence it will now be taken to Mr President for assent to make it a law.”

Experts at the event proposed measures to curtail the dangers posed to the donkey population by the international donkey trade.

They advocate for a combination of actions to stop the exports of donkey parts.

Legislations and enforcement, they say, will make those engaged in such activities to have a rethink.

The CEO of The Donkey Sanctuary, Mike Baker, said the group will engage more with local communities and enhance communication to let villagers understand the implication of parting with their donkeys.

Preservation, he said, becomes a major solution to saving donkeys as it is almost impossible to breed donkeys in large numbers.

“It can take over three years to have a single donkey. Donkeys don’t get pregnant easily and when it did, it takes some 12 months for gestation”.