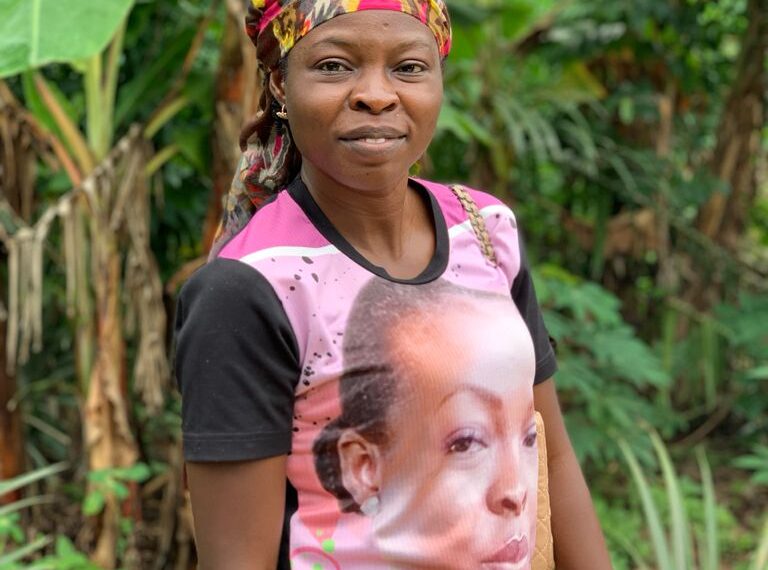 My first crops were cucumbers and okra which is one of my favourites.

Bukola Fadairo, a graduate of Mechanical Engineering at the Federal University of Technology, Minna, is a crop farmer in Oyo State, south-west Nigeria.

She is the CEO of Emmanuel farm where she produces cucumber, okra, watermelon, tomatoes, cassava, maize, palm kernel and golden melon.

She spoke to PREMIUM TIMES about her journey in agriculture and the challenges she has faced.

PT: Can you put us through your journey in agriculture? How long have you been cultivating? Why did you go into farming despite studying Mechanical Engineering? There are lots of automobiles and other mechanical systems in the country.

Ms Fadairo: I started in late 2018 after the completion of my service year. When I completed the service, I saved some money from the service. I got back home, met my cousin and we discussed how I can spend the saved money wisely.

I actually applied for a job but most are in Lagos and I’m not ready for Lagos’ stress. He advised me that I should invest in garri business which I did. It was productive. I did the buying and selling thing successfully but after about three cycles, I got tired of it and I had to stop. He then advised me that I can go into crop farming.

He introduced me to it and my first crops were cucumbers and okra which is one of my favourites as I plant okra every year. But in November 2019, we decided to try the irrigation system as there is this stream behind the farm, and we introduced the system and it worked. We then planted okra in view of a proper harvest in 2020 but cattle entered and we got nothing in return, not even one okra. I planted cucumbers again and still, the cattle came and nothing was harvested. It was quite annoying but I didn’t stop.

So I just keep planting cucumbers, okra and watermelon and they yield as good as the land is very fertile. My aunt who gave me the land once used it for poultry farming. It is a one-acre land. After a year plus, I gathered some money and purchased 3 acres of land where I plant cassava. I also rented about 15 acres of land and plant maize and cassava simultaneously. So for now, I’m not looking for any job offer except they are ready to pay me over N300,000 as a starter.

PT: Raising capital is hard, when you started, how much capital was involved?

PT: Being educated, you should have heard about climate change and the issue around it. How do you think this has affected food production?

Ms Fadairo: It has really affected me. In 2020, there was not much rainfall which affected many of my crops. I planted okra, cassava and none survived. I have a man like a father to me who looked out for me. He planted about 23 acres of maize and all died.

Also in 2022, the drought started suddenly and those with maize will have an issue but for cassava, you might be lucky except you run an irrigation system on your maize and cassava plantations. This irrigation system also differs as there’s oxygen effect on crops. Irrigation system with a flowing stream or river as the water source will yield more results than one with a borehole source which is still better than one without a system.

PT: Pesticides and fertilisers are two key inputs for farmers which if carelessly used can be harmful to the plants and humans that consume them. How do you think the issues around these have affected farming in general?

Ms Fadairo: Using herbicides on weeds on some farmland affected the land because some plants need the weed to preserve the soil nutrients but when they are controlled using herbicides, it affects the nutrients in the soil. Before herbicides, you could use land for 10 years yielding results but now, it doesn’t last up to that.

The moment you use farmland for 5 to 6 years, you stop getting the expected yield return. You introduce enhancers like fertilisers and Co, the yield improves a little and that’s for a little while.

So what I do is crop rotation and it works. When you do, you don’t have the same pest on that farmland. I plant okra this year, there are pests that are particular to okra and so are weeds also. Next year, I will plant maybe a golden melon or watermelon.

When those pests come around, they don’t get the okra and they are not used to watermelon or golden melon so the only thing they’ll do is go. By the time the watermelon pest comes, I’m done and I’m switching again to cucumbers and the cycle continues.

PT: You have lands for farming. Some were given, some leased and some bought. The ones bought, were there issues with respect to gender when you wanted to purchase them?

Ms Fadairo: I was actually introduced to the farmland by the owner who is my guardian. He told me if I had a particular amount he could leave the land to me and I will subsequently balance up the payment which I did and I had to pay up gradually about 3 times.

PT: Have you applied for any loans before?

Ms Fadairo: No I have not as I’ve not gotten anyone that seems legit. I never applied for a loan and I don’t know how they work or the processes involved.

PT: As a woman farmer, what is your experience in controlling your labour forces taking into consideration that you’re a woman in the farming business?

Ms Fadairo: At the start, I talk with them and even give them part payment. Some actually do the work while some don’t and they run with the money. Some years back, I got someone to weed off my okra farm, took him there and gave him part payment. I called his number but he has switched his sim with a child’s; when I call it’s a child’s voice I hear over the phone. That year, I nearly lost my plantation.

When the harvesters got there and did their work, I still went there and saw unharvested okra which is not their fault because they do their harvest as early as 5 a.m. while it is still dark and they can’t see as the farmlands have not been properly cleaned. I waited about 3 months, used a different line to call him and he picked and I later got him. Also, I paid people to erect perimeter fencing around my land that’s always damaged by cattle. They did a very bad job.

PT: Aside from these challenges, what other challenges do you face?

Ms Fadairo: The highest challenge I face is getting a labour force that’ll work for you. Some labourers worked for me for three days but I paid them for over 1 week. When I paid them, they said they’ll go the next day. That I should send people to come verify.

When I sent my cousin, he reported that there was nobody on the farm for like three days. Putting off the phones and lying about why they’ve not done the work and this is at night after they’ve put their phones back on. I really don’t have much of a choice, I still call them and engage them to work for me knowing they will delay the work. But it’s cheaper to use them at 10000 than facing the same delay at 25000 or more.

PT: Being a married farmer, how supportive is your husband with respect to your farming business?

Ms Fadairo: My husband has been very supportive of my business. He met me while I was already farming. Most of my farmlands where I can’t go now, he’ll go there and handle the work there.

PT: Of all the crops you produce, do you have an available market for them?

Ms Fadairo: Yes there are. When I plant okra, I target the market days which come every five days. I harvest a day on the market day or in the morning of the market day because once okra is harvested, it spoils after three days and sometimes late in the evening before the market day. We take it to the market the next day.

INTERVIEW: Women in Agriculture: How I combine farming and schooling – Hope Manzawet