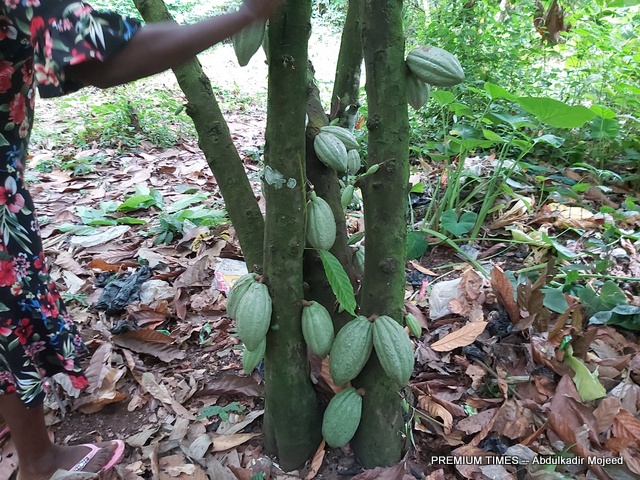 Cocoa tree bearing unripe cocoa pod yet to be harvested

Agriculture was the mainstay of Nigeria’s economy before the discovery of crude oil.

However, Cocoa was a major agricultural export commodity in Nigeria, and a top foreign exchange earner in the 1950s and 60s. Prior to the discovery of crude oil in commercial quantities in the 1970s, Nigeria was the world’s second-largest producer of cocoa.

Recently, during a national broadcast to commemorate the Nigerian “Democracy Day”, President Muhammadu Buhari said Nigeria’s revenue from cocoa and sesame seeds has increased by $79.4 million and $153 million respectively in the past year.

“Our efforts on growing non-oil exports have started to yield some results. For instance, in the past year, our revenue from cocoa and sesame seed increased by $79.4 million and $153 million,” he said.

Nigerian cocoa farmers, who spoke with PREMIUM TIMES in late August, have, however, raised alarm over the continuous dwindling of production which they attributed to lack of adequate support from the government and seizure of rainfall in August, as mid-crop harvest commences.

“First we have an unprecedented seizure of rainfall, which is close to a drought in August,” Sayina Rima, the president of Cocoa Association of Nigeria (CAN), told this reporter when contacted.

He said the rainfall was rather very low, but that farmers are still optimistic, looking at the forecast from the Nigerian Meteorological department.

“There will be rainfall in the remaining season, but the mid crop harvest has already started in earnest and hopefully we will be given our percentage production, but that has cut our mid-crop forecast by almost half,” he added.

Mr Rima said cocoa farmers are poorly treated in Nigeria, and that they are not accorded the right support as at and when due.

“Cocoa that should be treated with utmost priority is being treated with levity and not given the attention that it deserves,” he said.

“The farmers never got palliatives, like we should expect from other sectors. Cocoa farmers should have been given palliatives, but I’m not sure any farmer will tell you that they’ve gotten any palliative that is meant for the sector,” he added.

Before now, the Nigerian government had flagged off the distribution of about 66, 000 cocoa seedlings and other essential inputs to smallholder farmers in the bid to mitigate the effects of the coronavirus pandemic on the sector.

This, the CAN president described, as a right step in the right direction, but that it came in rather late.

“We create the resources and get nothing from it. We’re the geese with the golden eggs and we do not even have quail eggs to eat,” he said.

“Cocoa has not really been featured in the Anchor Borrowers’ Scheme, all because we keep asking for a good gestation period,” Mr Rima said in frustration.

“Cocoa might be getting some attention, but I’m not sure for those who have gone in, if there have been any payment to any cocoa farmers yet,” he added.

In November 2015, President Muhammadu Buhari launched the ABP to provide farm inputs in kind and cash to small-holder farmers (SHFs) to boost agricultural production and for the country to reverse its negative balance of payments on food.

According to the guidelines of the programme, upon harvest, benefiting farmers are expected to repay their loans with harvested produce, which must cover the loan principal and interest, to an ‘anchor’, who pays the cash equivalent to the farmer’s account.

When contacted in March before the outbreak of the coronavirus pandemic in Nigeria, the spokesperson of the Central Bank of Nigeria (CBN), Isaac Okoroafor, told this reporter that under the Anchor Borrowers’ Programme, the sum of N2.45 billion has been disbursed to cocoa farmers.

“The loans are ongoing and we can’t disburse directly to the farmers except through their banks,” he added.

According to PricewaterhouseCoopers (PwC), an international auditing firm, Ondo State, being the largest cocoa producing state in Nigeria, has an output capacity of about 77,000 tons annually.

Odo aladura is one of several communities that earned the state the ranking.

However, the dwindling fortunes of farmers in the community is fast reducing production.

When PREMIUM TIMES spoke with Adesoro Grace, a famous cocoa farmer in the settlement, she said farmers are currently harvesting. She however, highlighted that the temporary seizure of rainfall is affecting the ripening, fruiting and production of cocoa.

“Look at all these empty spaces within the trunks of these cocoa trees. They are supposed to be bearing cocoa fruits, but due to lack of rainfall and proper chemical treatment, they’re all bare, and it’s not good for us,” she lamented.

“We’re hoping that when rain later falls, they will pick up,” she added. “Our major problem still lies in our inability to access good support from the government, in terms of fertilizers, chemicals and soft loans to aid our production,” she said.

Mrs Grace lamented that some of these inputs are provided to them by their produce buyers in lieu of cocoa beans during harvest, which are usually sold to them at a higher cost, knowing that they (the farmers) do not have sufficient capital to do so on their own.

Data from PwC indicates that a combination of rural poverty, increasing rural-urban migration, land degradation and the absence of incentives, have kept production at a subsistence level.

When contacted via telephone in September, the Director of Cocoa Research Department of Cocoa Research Institute of Nigeria (CRIN), Rasheed Adedeji, said the major complaint they’re faced with currently is the sudden change in the climatic condition, which is bringing in an array of problems.

“Presently, the weather is not what it used to be and that is affecting the performance of all the crops, as well as the emergence of pests and diseases. Like in the south-south area, they’re experiencing global warming. The rain is not falling in the pattern it used to,” he said.

Meanwhile, in early February, when PREMIUM TIMES spoke with Mr Adedeji at his office at Ibadan, he said the major reason why Nigeria still lags behind in cocoa production globally could also be a failure to pass across technology to cocoa farmers.

“We have the potential to reclaim our position in the global market. One of our major problems is that we have enough technology on the shelf, but to get them across to farmers, the support is not all that there,” he said.

“When you get to our markets, you will see fairly used jute bags imported from Ghana, written there Ghana Cocoa; our farmers will buy it and use it to bag our cocoa then export it through back doors.

“When you see that one outside the country, you will think it is a cocoa bag from Ghana. So, a lot of things are playing out that affects the actual production figure of Nigeria’s cocoa,” Mr Adedeji said.

More so, he highlighted that the dissolution of the Nigerian cocoa marketing board is a major bane to the growth and development of the sector.